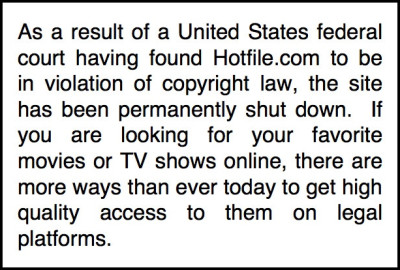 Yet another file hosting sharing service has closed its doors, possibly due to a ruling from the United States federal court. The Motion Picture Association of America (MPAA) had allowed it to continue to operate under strict conditions after they had reached a settlement with Hotfile.com for $80 million in damages.

The website is still accessible, although only for the above notice announcing the closure. Access to user account files has been disabled, and of course the ability to upload files.

In February 2011 the MPAA filed a lawsuit against Hotfile demanding up to half a billion dollars in damages. The longstanding battle between Hotfile and the MPAA was scheduled to go to trial again on Monday, but according to TorrentFreak the MPAA accepted a settlement of $80 million yesterday on the condition it starts using filtering techniques to prevent copyright infringement.

A few hours after the settlement was reached the site closed down, and has since failed to reply to customers or requests for information on the closure.

The MPAA has been very successful in its fight against file hosts with MegaUpload being perhaps the 'poster child' for the actions against similar companies; in the wake of the MegaUpload raids and subsequent closure, many file hosts opted to preemptively close their doors in fear of similar raids being carried out at their data centers and homes.

It's unclear if the closure was a result of the MPAA lawsuit, or a separate incident.