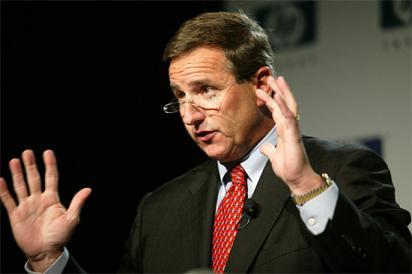 Although the investigation is in its final stages and Hurd was cleared of any sexual wrongdoing, he has decided to resign on the grounds of not "live[ing] up to the standards and principles of trust, respect and integrity that I have espoused at HP and which have guided me throughout my [his] career." The former CEO has been found in violation of company "Standards of Business Conduct" due to his altercation with a former contractor.

Engadget, who was part of the media call, was privy to some more details relating to this developing story. Apparently while personally involved with a contractor, multiple instances of reimbursement not related to HP business interests has been discovered. This combined with falsified expense reports covering up this apparent relationship has resulted in Hurd's departure.

Although stepping aside, Hurd has stated that "This is a painful decision for me to make after five years at HP, but I believe it would be difficult for me to continue as an effective leader at HP and I believe this is the only decision the board and I could make at this time. I want to stress that this in no way reflects on the operating performance or financial integrity of HP," and that "the corporation is exceptionally well positioned strategically. HP has an extremely talented executive team supported by a dedicated and customer focused work force. I expect that the company will continue to be successful in the future."

Interim CEO, Lesjack, has stated that she is not considering a permanent promotion, and is only filling the current need while the board begins its hunt for a new CEO and also consequently, chairman.