Sprint brought themselves out of a bad financial place with the release of the HTC EVO 4G in Summer 2010. At the time, it was the only phone that had access to a very limited Wimax 4G network, it had dual cameras, and it was the fastest Android phone on the block. Since then, the Android smartphone market has been more like a game of Whack-A-Mole, with a manufacturer popping out a new Android phone in what seems like every few seconds. 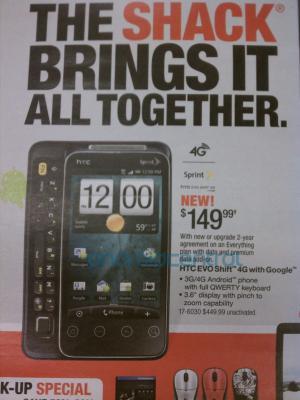 According to AndroidCentral, Radio Shack has leaked details and a launch date for a HTC EVO Shift 4G, the sequel to the phone that saved Sprint. Previously leaked details about the phone point to an actually slower and smaller model than the EVO 4G, this time with a slide-out keyboard. Its 800Mhz processor and 3.6” screen (down from 4.3 inches and 1Ghz) are reminiscent of the T-Mobile G2 and HTC Desire Z, and the price certainly reflects the change; Sprint will be offering this phone for $149 on a 2-year contract, as opposed to $200 for the EVO 4G.

Radio Shack’s circular has January 9 as the release date, which makes a lot of sense given that CES 2011 is happening the week before. We’ll likely have a nice introduction to the phone when Neowin invades Las Vegas for coverage of the entire CES weekend.