Last week, we reported on the HTC Edge, a powerhouse of a device with a 4.7” HD display, and packing a 1.5GHz quad-core processor. Today, a render claiming to be that of a device with even more outrageous specs has emerged – suffice it to say that these details must be taken with a fistful of salt, for the time being at least. 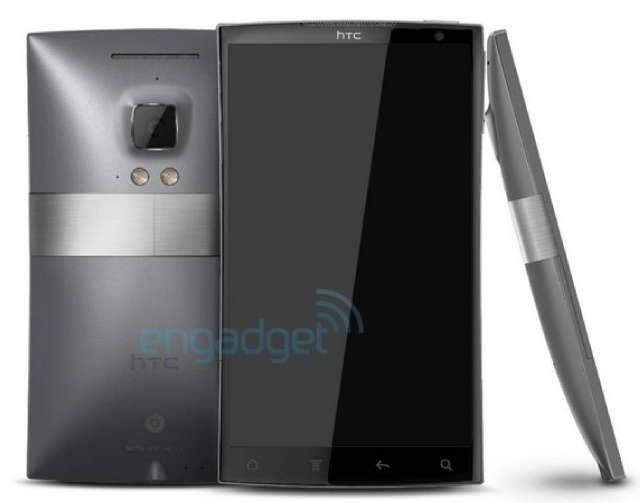 Behold, HTC’s Zeta. Putting the 1.5GHz processor of its sibling to shame, Zeta allegedly packs a staggering 2.5GHz quad-core APQ8064 Snapdragon processor into its shell. Its display is slightly smaller than that of the Edge, at 4.5”, but it still has a 1280x720px HD resolution.

Engadget’s source claims the device will have 1GB of RAM, with a 1.3MP front-facing camera and 8MP shooter with dual-LED flash around the back; as you’d expect on a device of this calibre, it’s capable of 1080p Full HD video recording.

There’s 32GB of built-in storage, though no word on a microSD slot to expand the available storage. Bluetooth 4.0 and Beats Audio are also built in, while a 1,830mAh battery keeps everything ticking (though for how long is anyone’s guess with that quad-core running).

Zeta is said to weigh 146g (5.15oz), while its unusually shaped aluminium unibody measures 109.8 x 60.9 x 9.8mm (4.32 x 2.40 x 0.39 inches). The design language certainly appears to be a natural progression of existing HTC designs, and the chiselled front juxtaposed with a curved rear creates an interesting look overall. Naturally, this bad boy has Android 4.0 (Ice Cream Sandwich) running the show, along with the latest version of HTC’s Sense UI.

This looks like it’s set to be a hell of a device if it’s real – but if it is, there’s no word yet on when we can expect it to arrive in our eager, wanting hands.


Update: Bad news, kids. Engadget have done a bit of digging around to try to find some more info on this bad-boy, but they're pretty sure it's nothing more than a concept of unknown origin, and not a real device on the way. It was a nice dream while it lasted. But if you're still craving a quad-core mobile fix, at least there's still that HTC Edge to look forward to. Woohoo!