It is quite hard to keep anything discreet nowadays, and Huawei has just experienced this issue. An advertising board at Barcelona Airport has started displaying a handset called the Ascend D quad. This hasn’t been showcased before, so the chances are; Huawei will make an official showcase of the device at its upcoming MWC press conference today. Its name suggests that this will be a quad-core smartphone and could be "the world's fastest smartphone". 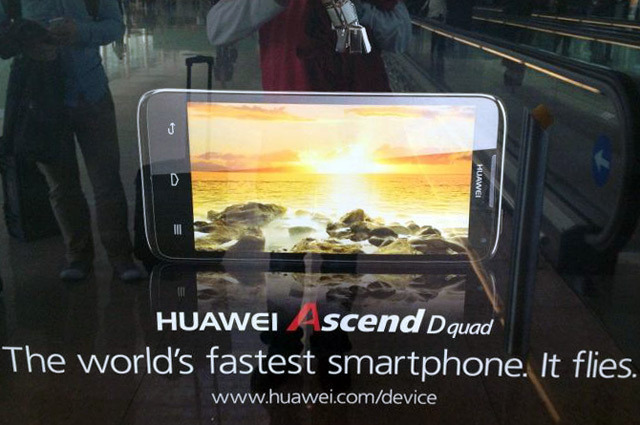 Despite most smartphone manufacturers planning to use Nvidia’s Tegra 3 chipset, Huawei is rumoured to use its own quad-core chipset. This chipset is rumoured to be twice as fast as the Tegra 3 and includes optimized power management features.

What do you guys think? Has the Ascend D quad got your attention? Let us know your thoughts. We’ll learn more later.

Update: The D quad was showcased at MWC and sports a bright 4.5-inch 720p display. The device is 8.8mm's thick and supposedly; feels smaller in the hand than most 4.5-inch phones. The device also runs Google's stock Android 4.0 (Ice-cream Sandwich) build.