While Apple and Samsung continue to battle it out for the hearts and dollars of North American smartphone consumers, Chinese company Huawei has jumped past Apple on the global stage for second place in sales market share. Just don't expect to find any of Huawei's phones in the top 10 most popular devices.

The company's jump in sales and brand recognition has increased significantly, primarily because of strong research and development investment, and creative marketing campaigns (such as a KFC branded phone for China), consulting firm Counterpoint Research said in a new report. The company is the leader in its home country, as well as areas such as the Middle East, Europe and Latin America, but Huawei still has little brand recognition in North America, India and South Asia. That means that the stay in second place may not be long-lived. 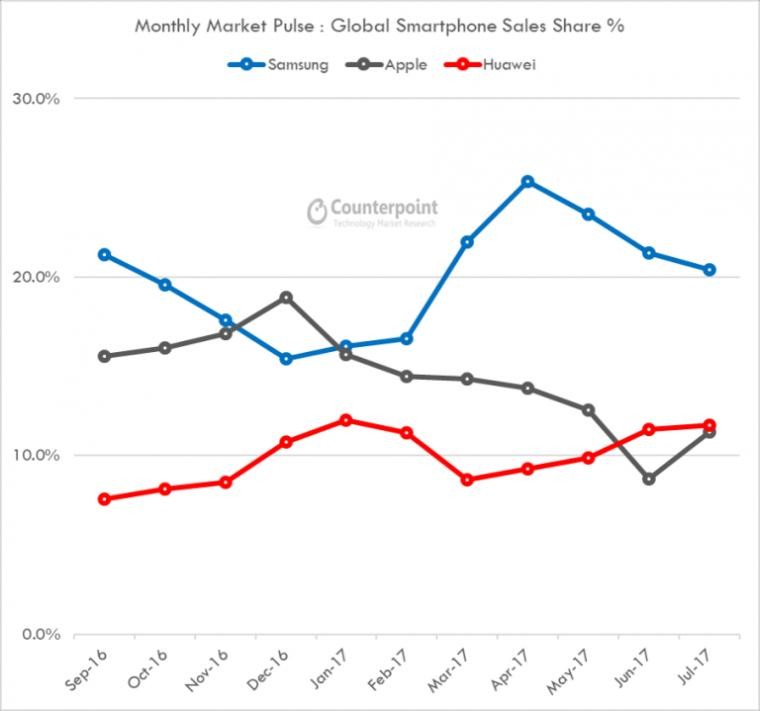 But that does not downplay the significance of the achievement and shows the growth of Chinese companies in the eyes of consumers. “Huawei, Oppo, Vivo and Xiaomi have successfully gained access to key supply chain partners, which has allowed them to launch designs with bezel-free, full displays, Augmented Reality, in-house chipsets and advanced camera features, that have kept them toe-to-toe with rivals," said Counterpoint's Associate Director Tarun Pathak. "These players have become as equally important as Samsung or Apple to the global supply chain, application developers and distribution channels, as they continue to grow in scale more rapidly than the incumbent market share leaders.”

What makes Huawei's move even more significant is that it does not have a "hero phone" that it relies on significantly in the way that Apple does its iPhone 7 and Samsung its Galaxy S8. In fact, Huawei has no phones in the top 10, something which could hurt it in the long run.

"While having a diverse portfolio allows Huawei to fight on multiple fronts, it does little to build overall brand recognition; something Huawei badly needs if it is continue to gain share," Counterpoint Senior Analyst Pavel Naiya said. "While Huawei has trimmed its portfolio, it likely needs to further streamline its product range like Oppo and Xiaomi have done – putting more muscle behind fewer products.” 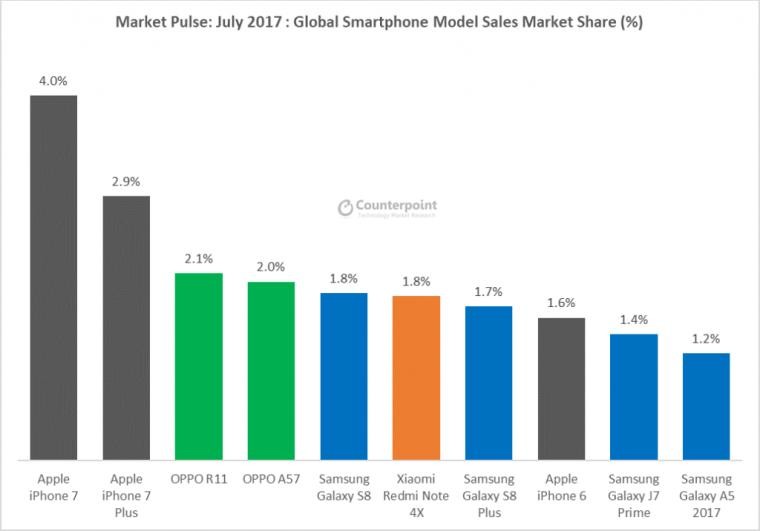 It will be interesting to see the August numbers and whether Huawei continues its trend. Apple was able to jump up in July on the strength of a new iPhone 6 32GB model that it launched in Asia, but not enough to overtake Huawei. With the new iPhone 8 handsets hitting this month, Apple is likely to take over second place again when the September numbers are released. This leapfrogging could conceivably continue into October when Huawei's Mate 10 units hit retail.

Overall, Huawei seems poised to take and hold the second spot eventually. The company is growing and still has three huge markets to penetrate, while Apple doesn't have much more room to grow. If Huawei can expand its brand awareness, Apple will need more innovation and a chunk of Samsung's market for any hope of regaining second place.