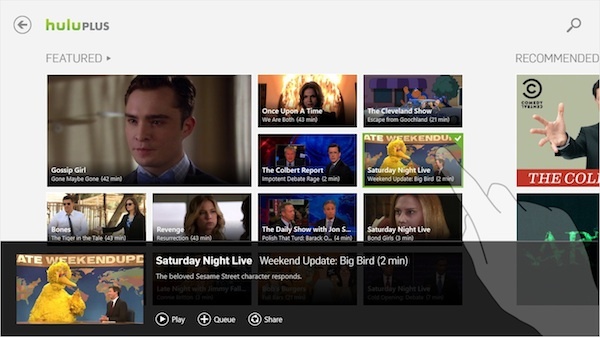 Netflix released its Windows 8 app earlier this month, and now its time for one of its biggest rivals in the streaming video space to do the same. Hulu has revealed that its Hulu Plus app for Windows 8 is now available for free download in the Windows Store.

While the app itself is free to download, the Windows 8 version of Hulu Plus does require an $7.99 a month fee to stream both current and classic TV shows from networks like ABC, NBC and Fox to your Windows 8 or Windows RT-based device. In its blog announcement, Hulu stated:

The new Hulu Plus app leverages core Microsoft design principles with our touch-optimized experience. The UI is simple and clean and puts the most relevant content first, creating a visually immersive experience in the most engaging way.

The app also allows users to pin their favorite TV shows on Hulu Plus directly on the Windows 8 Start screen for faster access. It will also support the Snap View feature which lets users watch a Hulu video while also working with another Windows 8 app.

Hulu also announced today that the Hulu Plus app will be pre-loaded onto a number of Windows 8 PCs made by Acer and Sony.