Rather than a slathering of Happy Birthday messages, Facebook has now aggregated all birthday wishes into a single thread. Though the endless stream of wishes is a nice ego boost from your (possibly imagined) friends, it often disrupted the general flow of a Facebook wall. By combining the wishes into one thread, the magnitude of your friend base is still represented, but displayed in a much cleaner manner.

Additionally, Facebook seems to be cutting down on multiple "spam" link and constant video re-posts by combining comments for the same video/link spread out between friends. Facebook's thread interpretation places the common video at the top with each video posters head comments and their children threaded discussions underneath. At a glance this will allow the users to view and participate in the general video discussion as well as the inevitable variations that occur from poster to poster. This combination is not only useful for viewing differing post contexts, but also commenting on each individual idea. 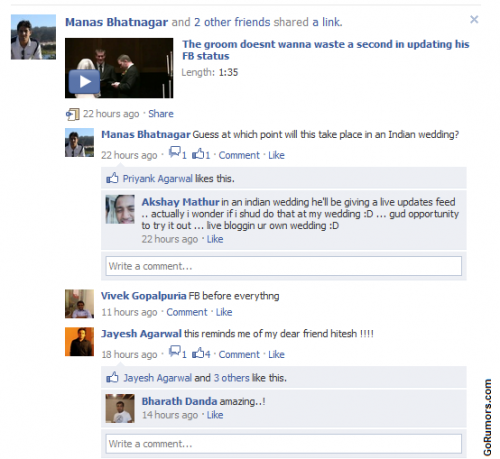 It seems as if Facebook's recent updates have been slowly added rather than through a backlash inducing large update. Historically, Facebook users have been resistant to large sweeping changes, so it looks as if the company has managed to devise an upgrade schedule that suits not only development but users as well. Single unpopular changes can also be rolled back due to negative feedback without the associated commentary.