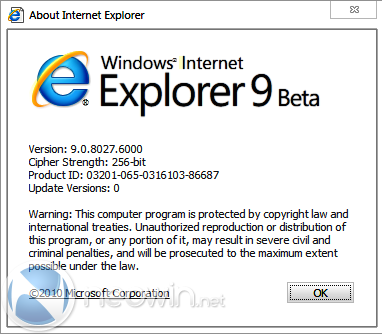 A new build of IE 9 has leaked to the web and shows a few tweaks and improvements. The build, version 9.0.8027.6000, began circulating the web over the weekend on your favorite sharing sites and it appears that it was compiled on November 19th.

The leak does include a few new features such as showing transfer speed in the download manager without having to overlay your mouse on the download. According to our forum, members who have downloaded the beta are saying that its a decent improvement over previous betas but it still has its flaws. Some are experiencing issues where webpages will hang for a considerable amount of time.

As with any beta, install at your own risk as this is not a public release. The few improvements do show a promising sign that Microsoft is listening to user feedback but this beta is primarily a core component update rather than any new eye candy.

Thanks for the tip R27

[Update] Microsoft contacted us with a small blub about this leak, "Microsoft has not released this Internet Explorer 9 code to the public and we want to caution consumers and businesses that downloading software (including workarounds) from a non-genuine source can pose risks to their environment. "