Samsung's upcoming flagships, the Galaxy S8, and the S8+ are probably the most anticipated phones of the year and the company would want to make a statement after what has been several months of bad PR. The phones, slated for a March 29 reveal, have not been spared by leaks as their looks and specs, variants and pricing, and their alleged release date are common knowledge at this point. Now﻿ it seems, the "Samsung Experience" launcher that the devices will sport has also been revealed. 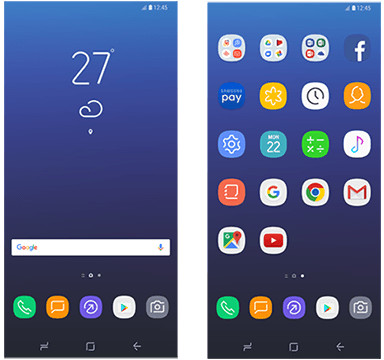 The images were reportedly found in the APK of the company's Smart Switch application. The images are, admittedly, unclear. However, they provide a very keen sense of insight as to what the company is trying to do here. The rounded icons and the cleaner interface are indicative of its attempt to move closer to the stock Android experience. With this shift, the company is trying to move away from the criticism it received for its previous launcher TouchWiz, for being overly convoluted.

The devices which are supposed to ship with the launcher running Android Nougat 7.0 will also feature the new hardware buttons that Samsung unveiled last month. The Samsung Galaxy S8, along with its bigger sibling, are expected to be released on April 21.