The rumors about Amazon creating a set-top box with gaming support continue to pop up. Today, the latest story involves leaked images that allegedly show a game controller that has Amazon branding. 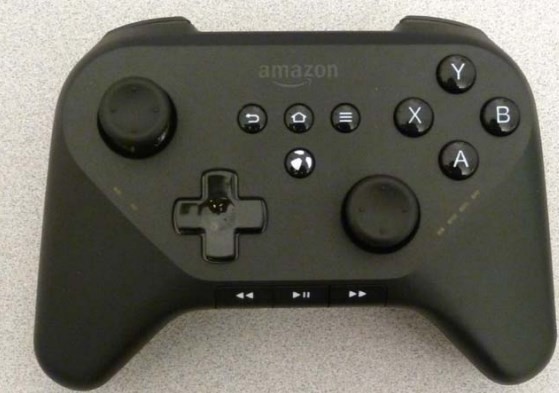 The images come from a PDF file that was posted on the Brazilian version of the FCC, Anatel, and show a Bluetooth-based controller with some familiar gamepad features. The photos show the controller has four buttons on the right side, two analog sticks, one on the bottom right and one on the top left, and a D-pad on the bottom left. Trigger buttons can be found on top and around the back.

The images also show some other buttons that are a bit different. The bottom of the controller looks like it has media buttons for play/pause, fast forward and reverse. The strangest buttons are in the middle, which look like the Home, Back, and Menu controls found on many Android-based smartphones. There's also a mysterious silver button below the Android controls. Finally there's some kind of LED lights built into the gamepad; four on the right side and two more on the left.

Amazon has been rumored to be developing an Android-based console for some time that could also serve as a streaming video box. In February, it was discovered that Amazon had acquired game developer Double Helix, who had made the Xbox One launch game Killer Instinct. The appearance of these controller images would suggest the company is close to revealing its console plans but exactly when that will happen is still subject to speculation.

Source: Anatel via Zatz Not Funny | Image via Anatel