While Intel's 8th generation of Core processors for mobile devices, codenamed Kaby Lake Refresh, was an iterative improvement over its predecessor, its desktop counterpart will introduce something Intel hasn't done in a long time: bumping the core counts of its mainstream CPUs. Today, Intel announced its latest Core processor family for desktop called Coffee Lake. The new processors will arrive in the market on October 8th.

The new family of Core processors will initially have six SKUs; three of them are unlocked and can be overclocked with a supported motherboard. The top of the line i7-8700K and i7-8700 have six cores and 12 threads. The i5 variants: i5-8400 and i5-8600k also have six cores but lack hyper-threading. While lower-end i3 CPUs have usually featured hyper-threading, this time around, Intel has decided to ditch it in favor of the updated core counts. 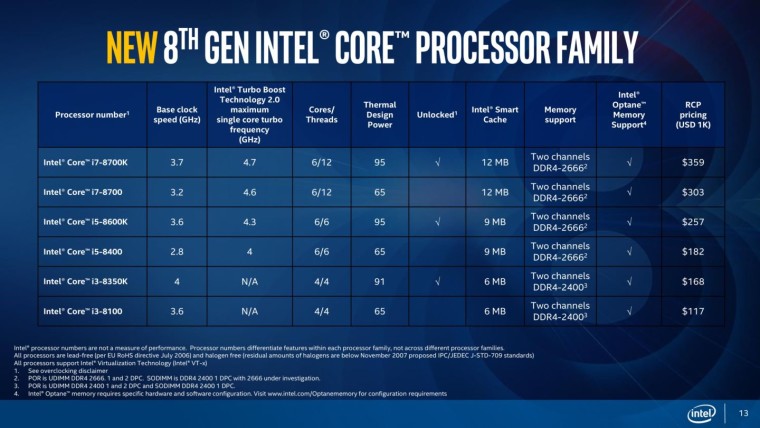 The new processors are based on Intel's 14nm FinFET process introduced with Skylake. Compared to previous generations, the new 14nm++ architecture provide better boost clocks and multitasking capability. However, the updated core counts come with a penalty: base clocks are marginally lower compared to Kaby Lake CPUs. Although according to Intel, this shouldn't be an issue; the company claims Coffee Lake CPUs will perform 25 percent better in FPS games than their predecessors. The additional physical cores and threads should also perform better under multithreaded workloads.

Intel is also launching a new chipset with its latest processors called Z370. This will introduce a better power delivery system for the new CPUs; native support for 2666 MHz DDR4 RAM and Thunderbolt 3 is also on board. Intel says its new platform will not be backward compatible with older Skylake and Kaby Lake, so people who want to upgrade to Coffee Lake, will have to buy new motherboards.

With Coffee Lake, Intel is finally bringing six-core processors to mainstream desktop PCs. Whether this is a proper reply to AMD's recent success, time will tell. The industry is warming up to witness the Intel vs AMD battle once again.