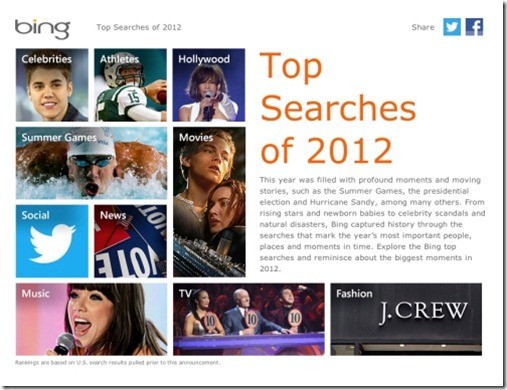 Yes, we know that 2012 is still over a month away from being over, but that's not stopping Microsoft from releasing its annual list of the news stories, people and products that were searched for the most on its Bing search engine. Microsoft released its 2011 list about this same time last year.

In today's press release, Microsoft said reality show star Kim Kardashian was back on top as the most searched person on Bing this year. Kardashian was number one on Bing in 2010 but lost the top spot in 2011 to pop singer Justin Bieber, who went down to number two on Bing's people search list this year.

For 2012, the iPhone 5 topped the search list in the news category on Bing, followed by the 2012 elections and the 2012 Olympics. Hurricane Sandy coverage and reality show "star" Honey Boo Boo rounded out the top five most searched news items.