Who likes vacuuming? I don't, and if I were asking this question to a crowd of people I doubt many hands would shoot up. Vacuuming carpet and cleaning floors is a down right mundane and repetitive task - so why not have a robot do it?

While the premise is pretty simple, this question has been searching for a complete answer for quite some time. Many companies have come up with solutions that get the majority of it right and iRobot has personally been at it for a while with its Roomba series. The company is taking another shot at the question again with a new addition to the family, the Roomba 980, which it's touting as its most advanced model yet.

This new model replaces the former top-of-the-line model, the Roomba 880. The Roomba 880 already did a great job, and if we compare it to the new 980, you won't notice a ton of changes on first glance. However, upon closer inspection, a lot has changed. I might even borrow Apple's slogan for the iPhone 6s because the same nearly applies - with the new Roomba 980 the only thing that changed was, well everything.

Though the 980 looks similar to the 880, underneath the hood it is a completely different ball game. Sure, there are some revisions to the AeroForce technology introduced in the 800 series, which uses rubber extractors instead of conventional bristle brushes. While the extractors do a great job avoiding getting tangled up in cables and wires, they have also gained a new trick - variable suction, which adapts based on the surface the robot is covering. I found that the new variable vacuum suction switched within a second after changed surfaces and seemed to pick up just as much as the 880, despite it being significantly quieter. This will also help preserve battery life, by spinning down the vacuum where you don't need it. Thanks to this, the Roomba 980 is able to run longer than the 880, which operates at a constant albeit quieter vacuum level. Overall, the robot is still pretty heavy, and while you should only have to move it when it gets stuck (which thankfully doesn't happen often), the weight does mean it leaves tire marks in the carpet, but more on this later. 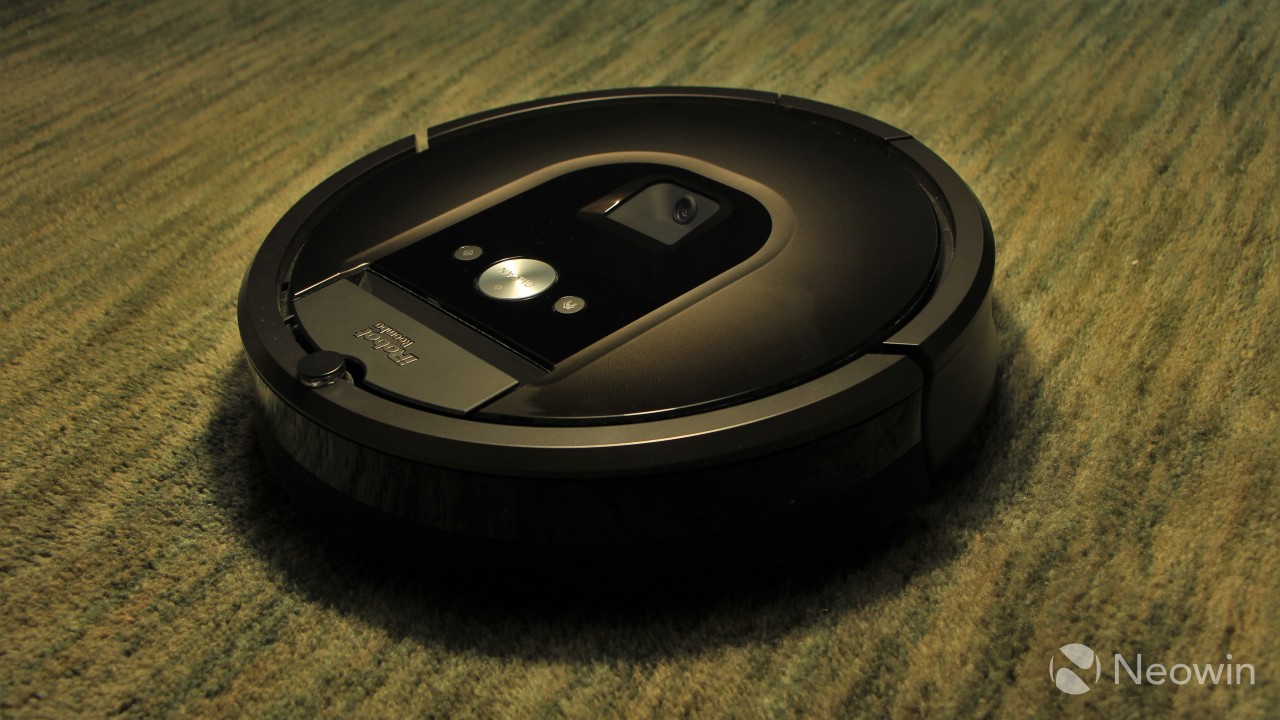 In regards to the battery, gone is the heavy Nickel Metal Hydride battery present in the previous models. With the iRobot 980, this is swapped out for a higher capacity lithium ion. The new battery allows the 980 to be even lighter as well as charge faster, this way it can get back to cleaning if it can't pull off your entire house in one charge. If the Roomba can't for some reason, this isn't a problem. The Roomba does the equivalent of bookmark, saving its place and returning to the home base to charge. After it is all charged up, it simply returns straight to where it left off. It takes roughly 90 minutes to charge and resume cleaning and while this sounds great, it could be a problem. I brought the Roomba home for the Holidays, and to save some time on Thanksgiving Day I started the cleaning process roughly three hours before guests began to arrive. The robot ran for a good while, but didn't finish the entire house and had to return to base to charge. 90 minutes later when my family was sitting down for Thanksgiving dinner the robot went back to work interrupting the meal. This required me to get up from my chair to go return it to its home base. While you could argue that I should have started the clean cycle sooner, I wish there was a way to push back the clean time while still preserving its digital bookmark. 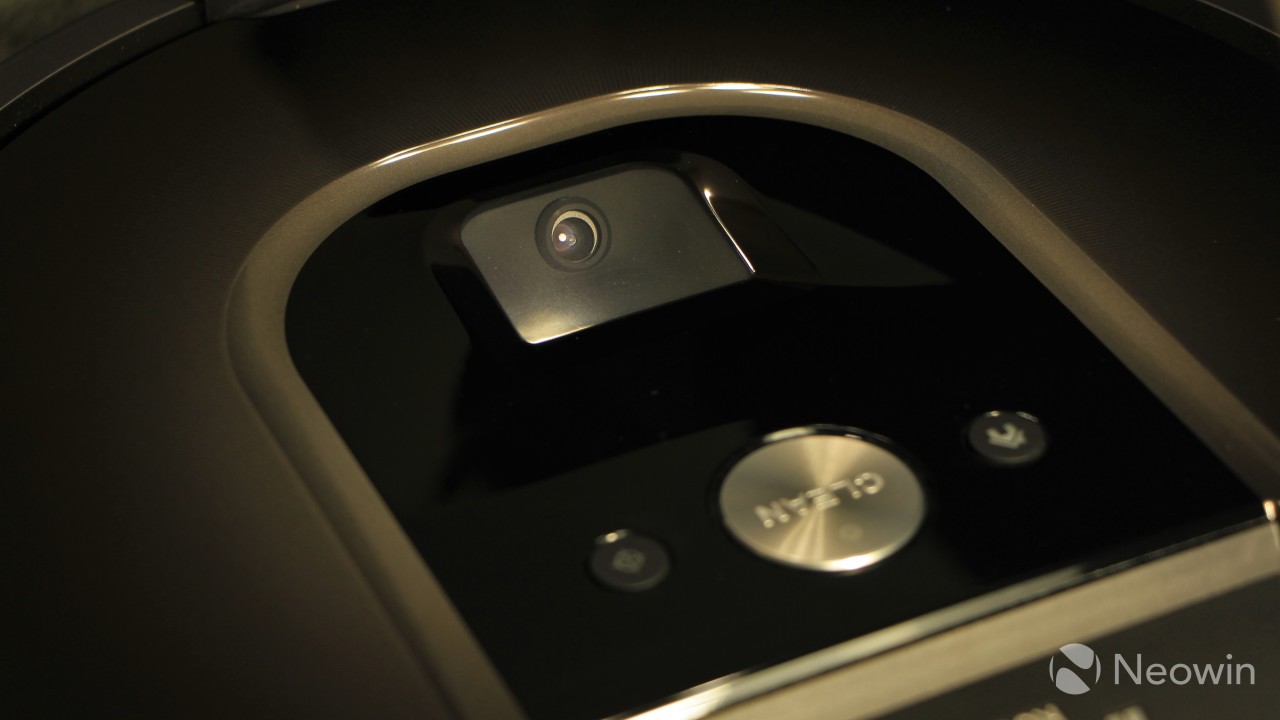 Clearly, there must be more new hardware that allows for the digital bookmarking capability, and it comes in the form of a new camera navigation technology dubbed iAdapt 2.0. Instead of aimlessly bouncing around your furniture and walls like previous Roomba robots, the camera will actually map your home in real time using furniture, walls, and other objects as markers to help it identify where it is and where it has been. The result is that your carpets look like they where actually vacuumed by a human, until you realize that a human couldn't possibly squeeze underneath your bed. With the random pattern and lighthouse navigation method of the 880 getting it to clean anything more than a couple rooms was a nightmare. The 980, with the new navigation system, can find its way around your house as it pleases without the assistance of any extra accessories, which is a big relief.

Going back to my comment on tire marks, if your carpet is fluffy enough, you will see exactly what path the robot traveled, and it doesn't look exactly appealing. The older Roomba 880 does the same thing along with the random pattern, which admittedly looks worse. If your carpet isn't too fluffy you won't have any issues with tire marks, just what you would expect from an upright and nothing more. I doubt the tires will actually damage your carpet in the long run, they don't dig into your carpet, just mat it down due to the weight. 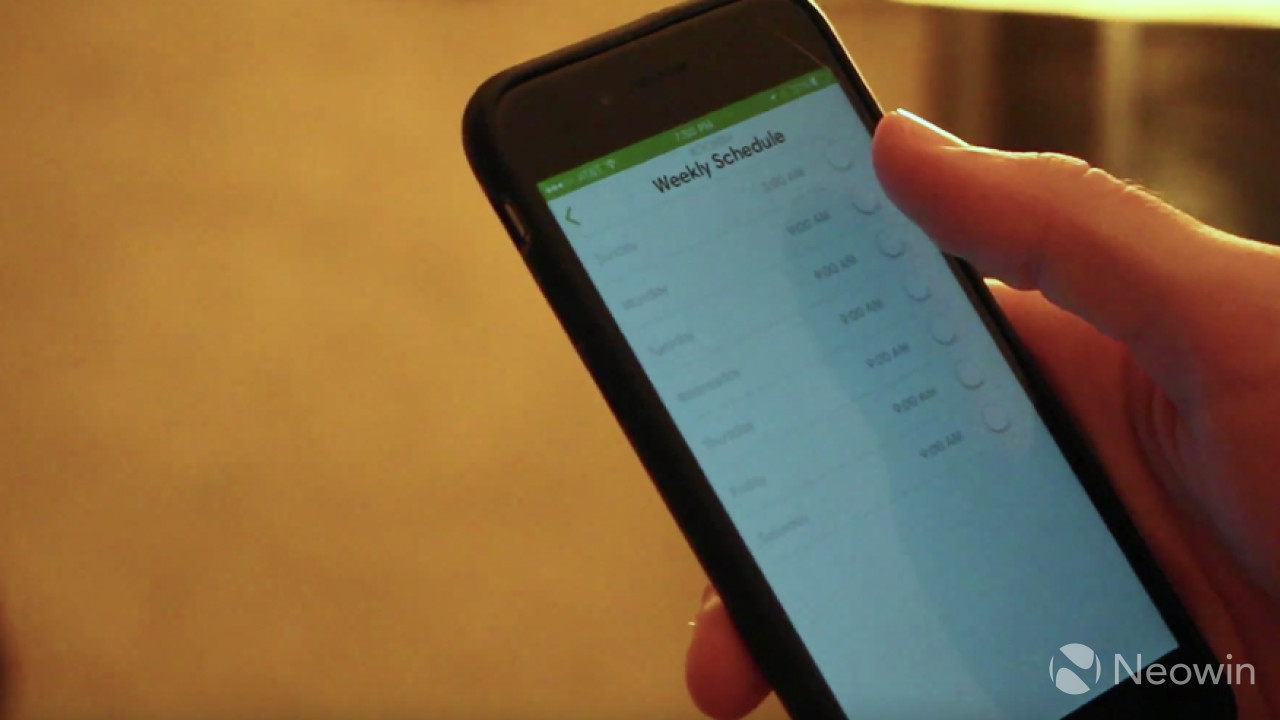 The next important addition is WiFi. With this addition, iRobot has officially entered the Home Automation/Smart Home market. The companion app which you can download for iOS and Android allows you to link your robot to WiFi as well access some cool features. After the initial setup you can schedule cleanings as well as start one remotely. You can also change some specific settings on your robot. Are your floors extra dirty? Select "double-pass" and the 980 will cover every area of your home twice, though depending on how dirty your carpets actually are, the dust bin may not be able to hold it all. The app is relatively basic, but for iRobot's first shot at a consumer mobile app it is pretty polished and it does get the job done. While I appreciate the fact that the robot doesn't save the floor plan of my house, I must admit it would be awesome to preserve a general house layout and maybe even let me tell it which rooms are which. Did the Thanksgiving dinner preparation leave the kitchen floor a mess? Let's tell it to only clean the kitchen - make that a double pass please. Ideally, I'd also like to see integration into popular services like IFTTT. If the Roomba 980 really is iRobot's entrance into the smart home, it will eventually need to play well with the other smart appliances and products I own. 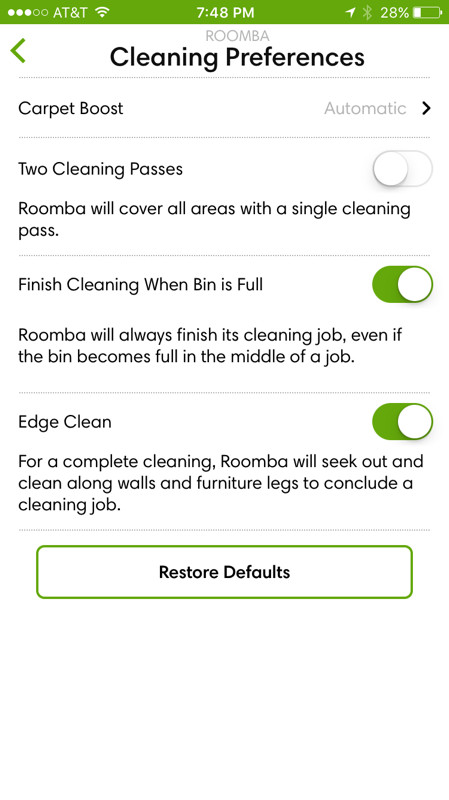 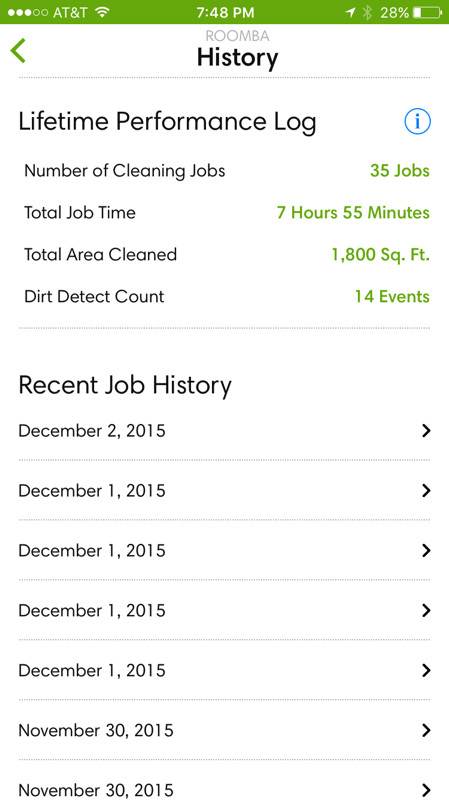 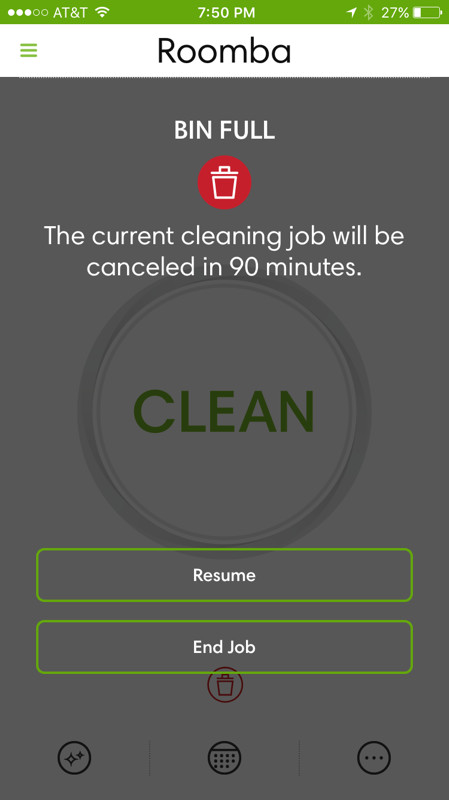 The scheduling and settings changes are cool, but I think the most powerful feature related to built-in WiFi is ability to update the robot. Where as it was possible to update previous Roombas, it wasn't well known or easy to do. With the new Roomba 980, it can constantly improve and receive software updates which in my opinion makes it the most future proof model yet in this regard. This alone may be a reason to feel better about your investment. It also makes my feature wish list a possibility and makes me feel like my feedback goes into improving more than just the next version of hardware. 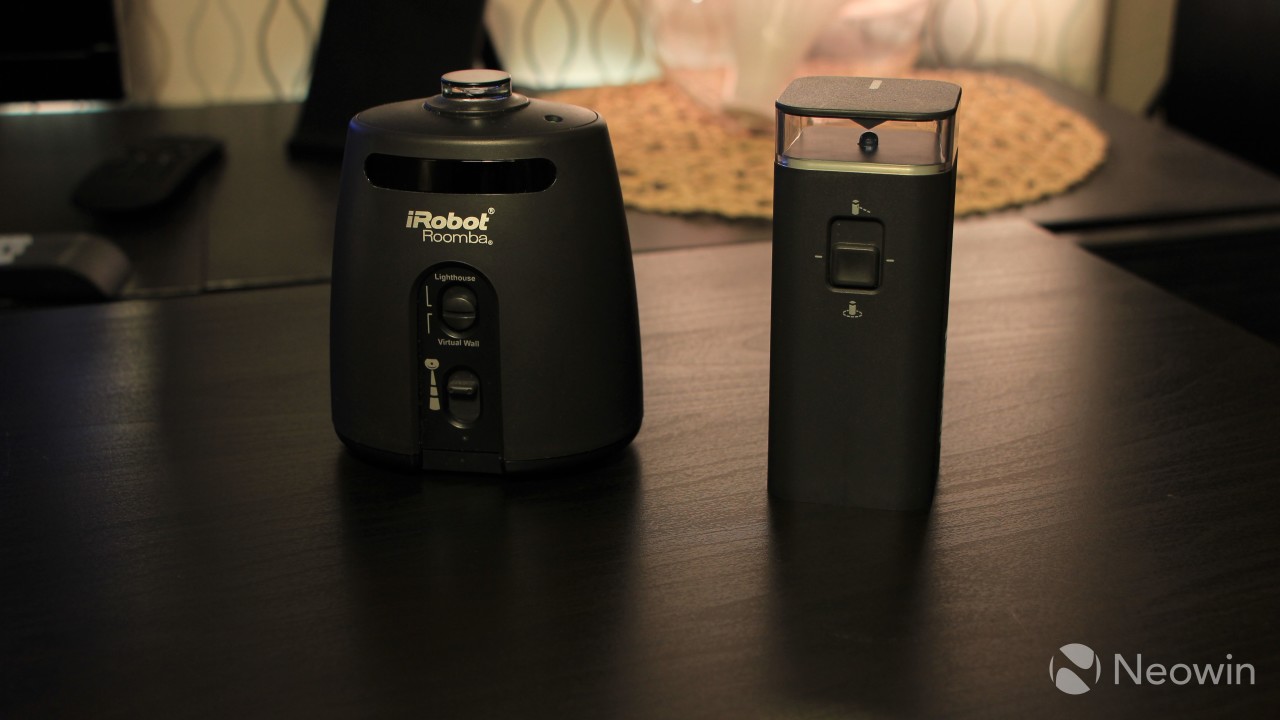 There are also some handy accessories that come with the 980. The physical remote for controlling the robot is no longer included, as it is replaced by the companion app, but the 980 does come with a pair of improved "Virtual Wall" beacons. There were a couple problems with the 880's combination lighthouse/virtual walls, besides the navigation difficulties I mentioned earlier. Whereas the previous beacons were bulky and required fairly uncommon and expensive C batteries, the new ones are slender and use a pair of AA batteries to power them.

They still act as virtual walls, but no longer perform the same virtual lighthouse functionality - something that is effectively obsolete thanks to the 980's improved navigation capabilities. Replacing it is a new virtual bubble mode which you can essentially place in the middle of a group of objects that you don't want the 980 to touch. The beacon will put an invisible shield approximately 4 feet in diameter around it. This is handy for dog/cat food bowls, or if you are a tinker like me, various projects, nuts, and screws that you don't want to go searching for in the dirt bin later. 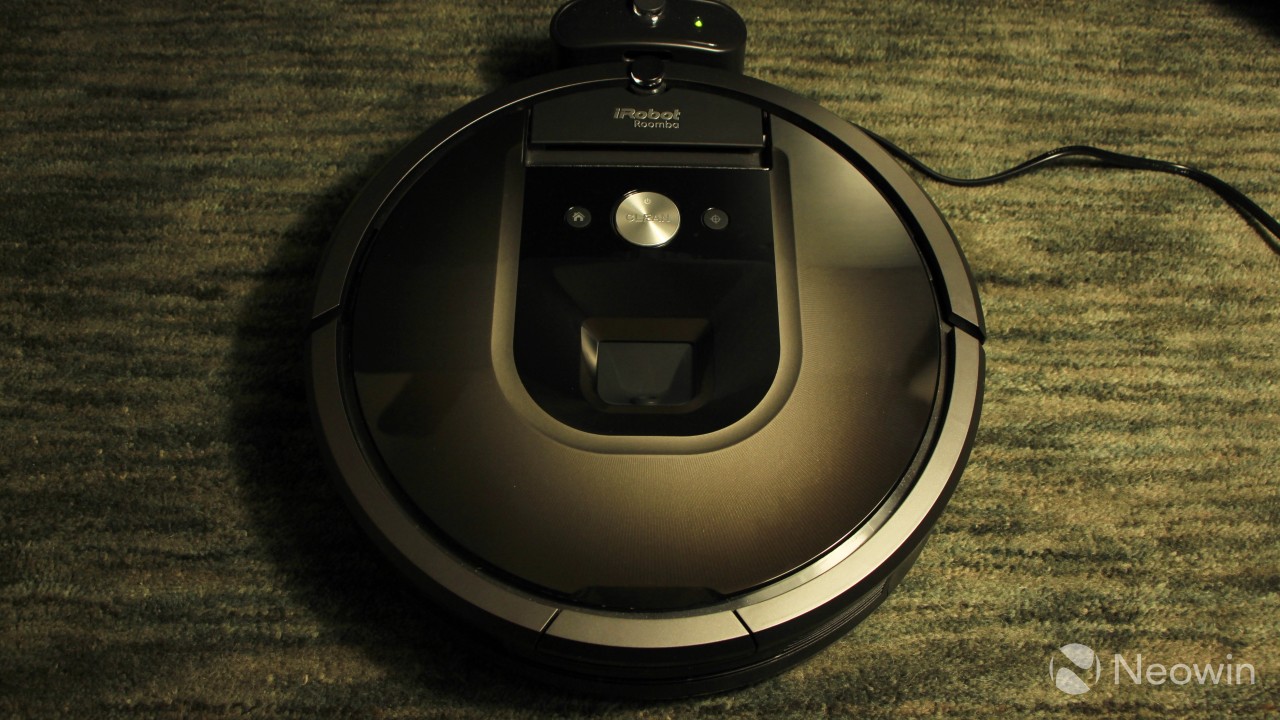 All of this comes at a price of course. At $900 it is not only iRobot's most advanced, but also its most expensive robot vacuum cleaner ever. As an owner of the 880, which originally cost only $100 less than the 980, I would have to say that if you are already considering a robotic vacuum cleaner in this price range, the added feature and future proof software is enough to warrant the extra money spent. If you live in a small apartment though, your money might be better spent on a cheaper model. However, if you live in a large multi-room house, this robot is one of, if not the best in its class. Overall, this might finally be the one that can completely replace your upright or at least get you out of dragging it out of the closet most of the time.