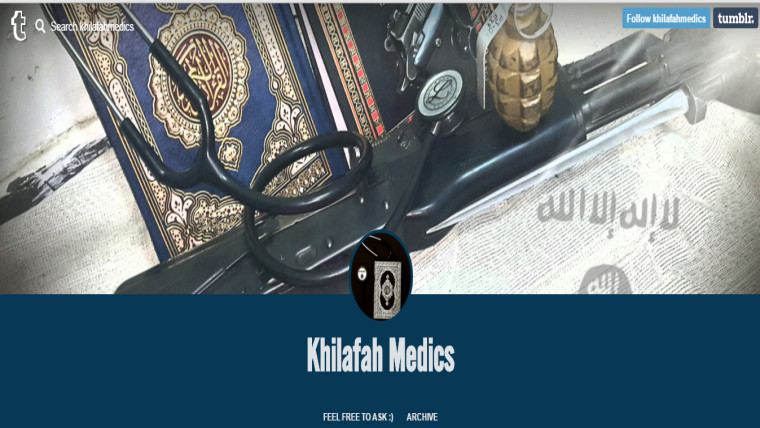 Since formally establishing a caliphate in mid-2014, the Islamic State has engaged in a large-scale bureaucratic expansion, with particular emphasis on its media agencies. ISIS operates numerous official agencies throughout its declared territories, or "Wilayats," and periodically publishes news magazines and official press releases in dozens of different languages.

Now, as part of its massive social media campaign which John McAfee hyperbolically described as "far more devastating than any nuclear war," members of the ISIS Health Department - Diwan al-Siha - have created a Tumblr account to answer questions and share medical information on the social media platform. The page offers an enlightening insight into the inner functionings of one of the world's most prevalent and feared terror groups, and how they maintain various aspects of their "state."

The English-language KhilafahMedics.tumblr.com is not officially sanctioned by the Islamic State, but has been mentioned in multiple official media releases. Members of Diwan al-Siha have taken to sharing information on the department - part of the Islamic State's larger, highly interconnected bureaucratic machine which manages the administration of its many controlled cities and territories - to share medical advice for members of the Caliphate.

Members of Diwan al-Siha responded to an anonymous message by a supporter who says he is planning to travel to Syria and join the Islamic State, but is concerned about his glasses on the journey. ISIS members responded:

Many of those who underwent eye correction LASIK surgery complain from:
-Eye dryness (They need to use artificial eye drops or wash their face very often

I think its better you keep the glasses (with an extra pair and also keep your eye measurements in case you needed to make new ones here ). but you must use your glasses along with a sport eyeglass strap.

Another anonymous supporter asked the group what he could concentrate on as a medical student in order to help ISIS as much as possible.

We advice all Muslims related to the medical field that helping the Mujahideen here in the lands of the Khilafah has more to do with what you have to offer, the more skills you posses the more beneficial you are, it doesn’t really matter whether you are a consultant or a medical student as long as you have basic medical skills.

However I recommend ALL medical students to consultants to concentrate on the field of trauma because the majority of injuries are war related and you need to be able to at least stabilize the injured patients until definitive/advanced medical care is provided.

For that I recommend perfecting all the skills and understanding all the literature from the well-known course ATLS (Advanced Trauma Life Support). Its available worldwide and anyone related to the medical field from medical students to consultants can register.

In addition to offering medical advice, members of Diwan al-Siha also use Tumblr to spread general propaganda and media releases from other aspects of life under the Islamic State.

For example, this post from December 21st shared media releases from Mosul in the aftermath of NATO coalition attacks in Iraq.

Another post from December 20th suggested medical equipment and first aid devices for ISIS fighters to carry with them on the battlefield.

The page reveals a high degree of medical knowledge from ISIS, lending credibility to conclusions from various intelligence analysts that the bureaucratic system of the Islamic State is unrivaled by any militant terror organization seen in the past.

The group's expansion to Tumblr is underscored by a wider conflict between various ISIS members and self-proclaimed members of the loosely affiliated hacktivist group Anonymous, which declared war on the terror group last month.

Since then, Anonymous has claimed several gains in their digital "war" against ISIS, including claims that it took down the "main messaging forum" used by ISIS members.

Tumblr will likely remove the page shortly, but at the time of writing, KhilafahMedics remains accessible.