Yesterday, we reported that the in-app purchase system seemed to be broken across all versions of Windows. It was unknown if the issue was global or if it was just impacting a portion of users, what is known is that a number of developers were complaining about the problem on the MSDN forum. While Microsoft didn't publicly acknowledge the issue, it now appears that the company has fixed the bug affecting in-app purchases. 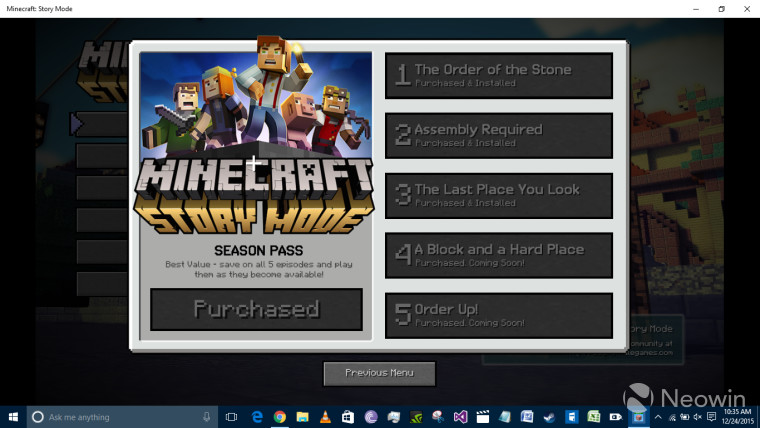 Until today, the store wasn't detecting our purchase of Minecraft: Story Mode's season pass - which is currently on sale for $14.99 - and would prompt users to buy the episodes separately again. Even if the user did purchase an episode separately, the store would charge the user for it, yet refuse to recognize the purchase. Naturally, this lead to users leaving poor reviews for apps on the Windows Store, affecting the developers unjustly.

However, Neowin has now checked the aforementioned game again and it appears to recognize the purchase of Minecraft: Story Mode's season pass, with all the current episodes showing up as 'Purchased & installed'. With that being said, the last reply from a developer on the MSDN forum was 12 hours ago, so we've been unable to verify if the problem has been fixed for everyone or if the fix is starting to roll out right now.

Do let us know in the comments if the in-app purchase system is working across your Windows devices now.