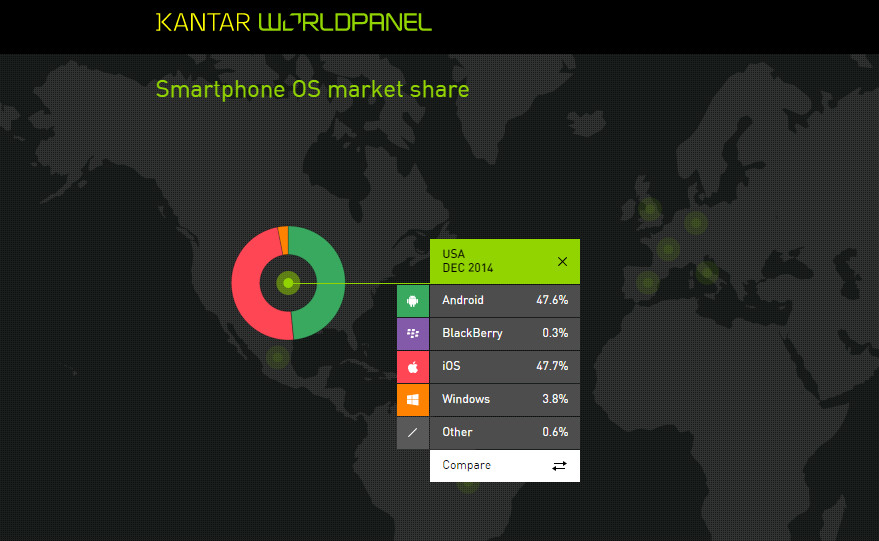 Kantar Worldpanel ComTech is a company that focuses on market research and consumer knowledge using data sources from over 60 countries to compile their analysis. They have now released the smartphone O.S. market share figures for the three month period ending December 2014, and they paint an interesting picture.

It looks like Apple's iPhone 6 and iPhone 6 Plus have been a great success for the Cupertino giant. We know from Flurry that iDevices were a very popular gift on Christmas 2014, and according to Kantar's latest figures, iOS is eating at Android's market share in the U.S., China and high income countries in Europe.

Carolina Milanessi, chief researcher at Kantar, reported that "in the US, Apple iOS overtook Android for the first time since this time in 2012, albeit by the slimmest 0.1% margin." Apple made the right decision when they chose to build a larger phone, and this helped them secure a large part of the premium segment in several markets.

In Europe, Android saw a 3.8% decline to 66.1%, with losses in the U.K., where Samsung, LG and Sony have had trouble selling their latest handsets. Apple managed to grow from 30% in 2013 to 42% in 2014 in the U.K. alone, eating from both Android and Windows Phone. Apple even grew a bit in China, where Xiaomi's Android phones are much more popular, and now holds a 21.5% market share in the country.

Windows Phone has only managed not to lose any more ground. Microsoft is looking to change that with Windows 10, universal apps, and the promise for more Lumia flagships in 2015. Samsung is also interested in making more Windows phones, and other hardware partners are joining as well.