Last week, a photo from an event in Malaysia revealed plans to launch as many as seven Nokia-branded Android smartphones this year. The new handsets are being built by Foxconn, and developed by HMD Global, which is licensing the Nokia brand for the next decade.

A leaked image published on Chinese social media platform Baidu purportedly reveals key specs of the first smartphone to emerge from that partnership.

The device appears to be the 'D1', which has popped up in various unconfirmed rumors and leaks in recent weeks, although the most recent Baidu image seems to show product packaging that refers to the handset as 'Nokia 6'. It's not yet clear if either of these is the final product name.

According to the image, the device's key specs will include:

The inclusion of ATMOS support is particularly unexpected; the handset is said to have an "intelligent amplifier for more powerful, deeper bass and volume".

You can also see from the image, published by VTECH, that the design of the 'Nokia 6' is similar to that of the D1 - although there are obvious differences around the camera. If they are the same device, though, that suggests that the 'Nokia 6' - or whatever it ends up being called - will be just 8mm thick. 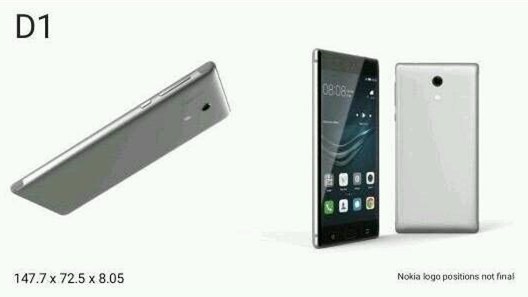 None of these details have been verified, so for now, it's best to take everything you see here with a pinch of salt.

HMD Global is expected to officially unveil its first Nokia Android phones at Mobile World Congress next month. The company said last month that its new handsets won't focus on superlative specs, but will offer "premium quality" and "competitive pricing".