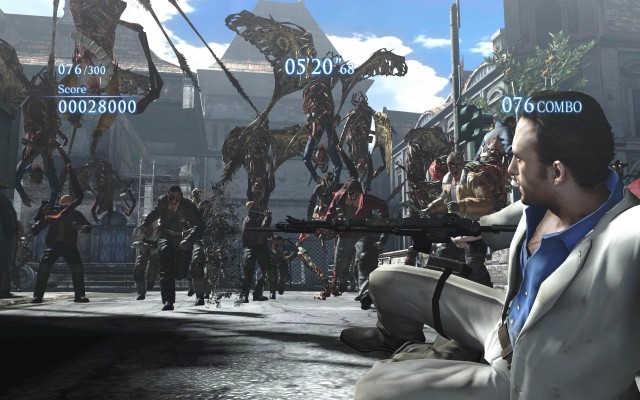 The two biggest zombie game franchises are about to get mashed together. Valve and Capcom have announced that the PC port of Resident Evil 6 will include a new mode, Mercenaries: No Mercy, that will allow gamers to play as the four characters in Left 4 Dead 2 (Coach, Ellis, Rochelle and Nick).

In addition, two of Left 4 Dead 2's Infected zombies, the Witch and the Mini-Tank (a smaller and "cuter" version of the Tank), will appear as zombies in this special Resident Evil 6 PC mode. The game will be released on Steam April 5.

Valve has also announced they plan to put three of Resident Evil 6's zombies (Lepotitsa, Napad and Ogroma) in Left 4 Dead 2 on the PC as special Infected replacements. They are also looking to add in Resident Evil 6's human characters (Leon, Helena, Chris, Piers, Jake, Sherry and Ada) but they are looking for the Left 4 Dead mod community to come up with the 3D models for those characters. They can be submitted to the L4D2 Workshop on Steam.

This crossover will be for the PC versions only; there are no plans to add this content to the console versions.