In November, Lenovo teased us with an image of its previously released ThinkPad X1 Carbon laptop, but with a touch screen and made for Windows 8. Today, Lenovo announced that the company is now taking orders for the new ThinkPad X1 Carbon Touch. 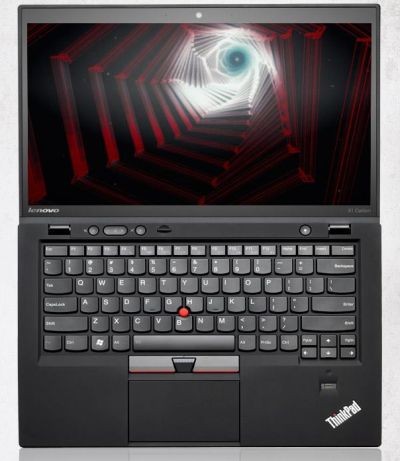 Lenovo's press release states that this new version remains the lightest ever 14 inch laptop, weighing in at just 3.4 pounds and with a thickness of just 20.8mm. That's due, naturally, to the laptop's carbon fiber material. The display support 10 finger touch for accessing Windows 8 "Modern" apps and the glass trackpad also supports the Windows 8 touch gestures.

Even with its thin and light design, the X1 Carbon Touch packs a punch. Powered by Intel Core i5 and i7 processors the ThinkPad X1 Carbon Touch invites users to enjoy multimedia content with Dolby Home Theater v4. Certified as the first Ultrabook optimized for Microsoft Lync, the HD face-tracking camera and dual array microphones ensure high quality video and voice track capability without the need for USB peripherals.

Lenovo is also offering buyers the option to use a new AC adapter for the notebook, which it claims weighs 53 percent less than the standard AC adapter. This should be good news for those business and frequent travelers who don't want to mess with heavy power cords. Pricing for the Lenovo ThinkPad X1 Carbon Touch starts at $1,499.