You may already know that Apple licenses the name iOS from Cisco, but did you know that LG, one of Apple’s suppliers, had an iPad a full 9 years before Apple? According to an article published way back in 2001, LG showed off their Digital iPAD, ‘Linux-based Web pad,’ at the CeBIT computer fair in Hanover, Germany.

The device, which apparently never went to market, seems pretty pitiful by modern standards; boasting a 206Mhz Intel SA-1110 and requiring a stylus for input, it really couldn’t hold a candle to a budget-priced Polaroid tablet, let alone one of those other iPads. It did, however, offer expandability, thanks to a slot for Flash memory cards and PCMCIA cards, whatever the hell that is. 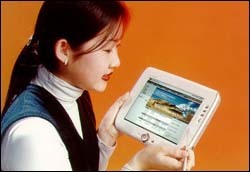 From the small photo included in the article, LG’s device looks pretty clunky, too. And despite the claim that the device would be released in Korea ‘within the next 12 months,’ if it ever went to market, we can’t find any references to prove it. It would take a few more years for technology to catch up and make tablets into the kind of amazing experience that people like Bill Gates were dreaming of back then.

There is one lingering question: why hasn't LG sued Apple over the iPad name, like certain others have? There's a couple of possibilities. One is that LG doesn't own any rights to the name, since they never actually took their product to market. The other is that Apple quietly licensed it from them. Or maybe LG just forgot about it, like everyone else.