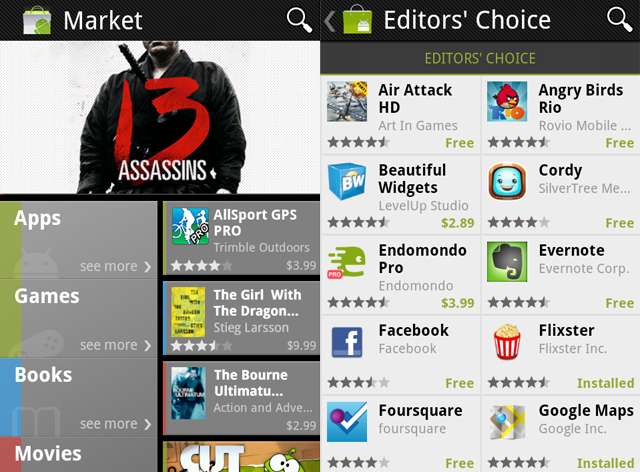 Google's major content and feature update for its Android Market app has apparently started to be made available for people who own Android-based smartphone and devices. Engadget is reporting that it has received word from many Android smartphone users that the new Market app is now online. That also seems to be the case among many Android users who have taken to Twitter to announce they have received the new version of the app. The Android Market update was announced by Google earlier this month. The update may take a number of days to finally move to all Android based phones.

As we have previously reported the biggest new additions to the Android Market in this update is the ability to directly download movies and ebooks. In terms of the movie store, the Android Market will work much in the same way as Apple's iTunes with movies from the major Hollywood studios available for rental for as low as $1.99. You can choose to stream the movie via your wireless connection or you can download the film directly to your phone's storage device if you want to watch the movie without the need for a wireless connection. The movie update is for North America only but other countries will apparently get a movie store in the coming months.

The new Android Market also allows for the direct download and purchase of ebooks without the need to go to a third party application such as Amazon.com' Kindle. The interface of the Android Market itself has also gotten a major makeover. The user interface is now easier to read and there are also a number of other changes and improvements.