In a recent update to Apple’s online backup and file storage service iDisk, users can now play media stored on their iDisk through any connected mobile device. According to Michael Robertson of the music service MP3tunes, this could very well the first step Apple is taking in a long road that may bring them towards more open media sharing and streaming policies. While the functionality isn’t robust by any means – it isn’t iTunes playlist compatible, for instance – it is most definitely something we haven’t from seen from Apple to date. Most content providers require that services that stream media files be licensed to do so, and Apple typically errs on the side of caution when it comes to the publishers.

Either way, this functionality isn’t something that’s obvious to enable. It’s not difficult by any means, but Apple is certainly not advertising this as part of the iDisk system; it doesn’t show up in the official feature list. You have to access the “more” menu to enable the option to “Play audio from your iDisk while using another app.” 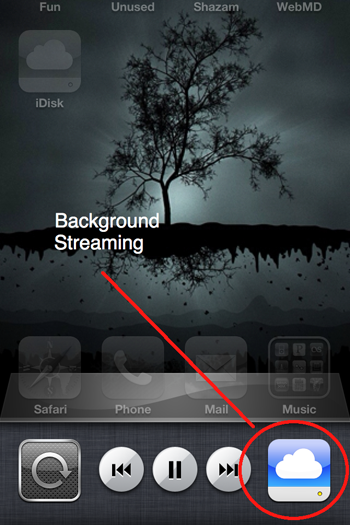 As Apple begins preparing for cloud based iTunes, this could turn into the first small skirmish the company has with content providers over licensing. If Apple follows through on the promise, however, this definitely won’t be the last battle.