Microsoft is squeezing in one more update to its Android OneNote app before the end of 2013. The app, which last received a major update in July, now has a new version available for download that will let people add content from any other application to OneNote. 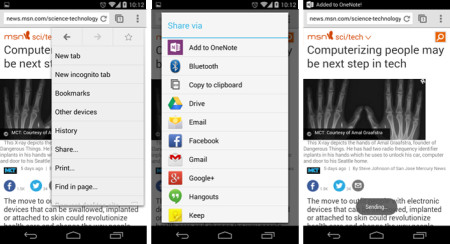 The OneNote blog states that the new version, available via Google Play, offers two ways to add content to the app. One way is to look for the Share button in certain apps like a web browser, a recipe application or others, and the other is simply to take a screenshot of whatever is on the display. In both cases, the content can then be included in the app by selecting the "Add to OneNote" option.

Microsoft also says that the new version of the OneNote app can be used by Samsung's more recent Galaxy S and Galaxy Note smartphones in their multi-window mode. That should allow users to capture and store information in one app more quickly to the OneNote application.

The new version also includes a OneNote Recent Widget that's made to be placed on a Android device's home screen. The widget offers quick access to any recent notes that have been created or modified, or it lets users just add a note, such as a shopping list or meeting schedule, directly on the home screen. Finally, the new version has a number of unnamed bug fixes that Microsoft says should "provide an improved experience overall."