Microsoft has Google in its sights with an upcoming Hotmail refresh due this Summer.

Hotmail "Wave 4", as it is currently dubbed internally, will introduce a new set of features with security at the heart of the popular webmail service. Last week, Neowin met with Microsoft's Walter Harp, Director of Product Management in the Windows Live division of Microsoft. Harp's team focus on Hotmail, SkyDrive and related security platforms and technology such as Microsoft SmartScreen.

Microsoft is excited about the new Hotmail and claims it is "the most efficient email for busy people." You may have seen some of the new advertising, focusing on "the new busy". This advertising is gearing up to a Summer of Hotmail improvements for those fed up with a cluttered Inbox. Microsoft has gained valuable experience from their Exchange and Hotmail offerings and believes they've captured the three main pain points of email:

Microsoft claims 80% of what is reported as "spam" isn't actual spam. It's what the software giant calls "junk mail". According to Harp many people sign up to newsletters years ago and they continue to clutter mailboxes. In most cases un-subscribing to newsletters and promotional mailings can be a difficult process with users having to search around the email content for a tiny un-subscribe link. Because of junk mail, only approximately 50% of your Inbox contains mail that you care about. The rest is clutter according to Microsoft. It's this clutter that is overwhelming some users and making Inbox management difficult.

Microsoft is introducing a number of different ways to cut down on "gray mail". The company is working on the following features:

Most of the new features in Hotmail help with reducing mailbox clutter, improving photo sharing and getting things done. As we revealed last month, Microsoft is introducing Push Mail for mobile devices. Utilising Exchange ActiveSync, iPhone, Windows Mobile and Android devices will all be able to synchronise mail, calendar and contacts between Hotmail and the phone. Microsoft is also improving the user experience for those that use mobile browsers with Hotmail. The new mobile Hotmail will support filters, in-line message previews, HTML messages, offline email viewing and conversation viewing. A number of Hotmail partners will also be building custom Hotmail apps for other mobile phones including BlackBerry and Nokia devices. 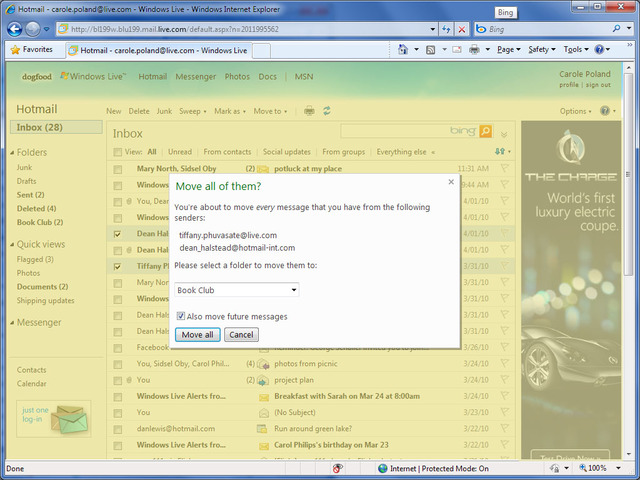 Microsoft is also adding a new viewer to Hotmail that integrates content from third party websites when you receive email. The feature is dubbed "Active Views". Photo attachments can be viewed easily from within Hotmail and Active View will list the content of an email at the beginning of a message. There's no need to download photo or video attachments as Hotmail automatically creates a great looking photo slide show for users. The feature also works with shipping notifications, providing you tracking information directly within the email without having to copy a tracking number and pasting it into a website. 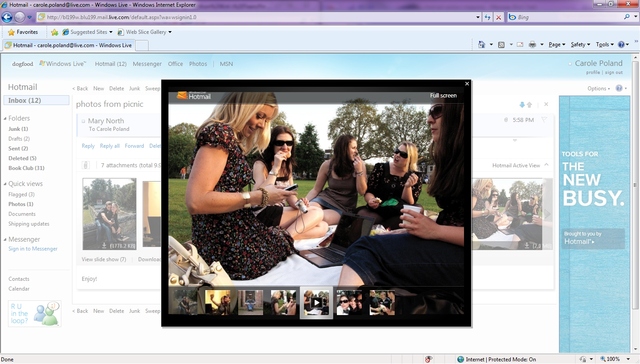 Last but not least in new features is the ability for users to open Office documents within Hotmail. In the past users have had to rely on downloading attachments and then opening them within their Office desktop applications. More often than not there would be compatibility issues due to different Office versions. Microsoft has built office document viewing straight into the browser within the new Hotmail. Users simply click to view the attached documents and they will load within Hotmail. 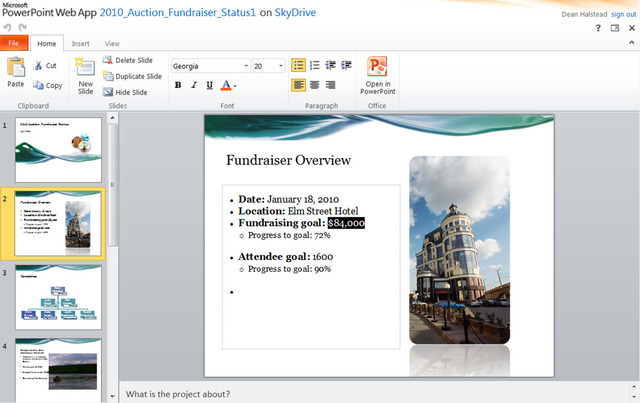 Microsoft is adding the option to privately associate certain information with your Hotmail account. These "proofs" of information will allow users to recover access and control in the event of a hijacked account. Instead of simply answering a secret question and answer combination, if you lose your password or if your account is compromised you could regain access to your account via an SMS message. Microsoft will also recognise if you are using a computer that you've registered with Hotmail.

Single-use codes are being implemented for when you sign in from public computers. Using single-use codes means you no longer have to type your password into a computer at an internet cafe or an airport. You simply request a code and a one-time use authentication code will be sent to a private "proof" that you have setup. This "proof" could be an alternative email or mobile phone.

Microsoft will also be providing full-session SSL encryption at login for all accounts. The company plans to launch this later in the year after the initial roll out of the new Hotmail. The option will allow users to maintain SSL encryption between themselves and Hotmail servers during their entire Hotmail session. The final piece of Hotmail's security enhancements is trusted senders. Microsoft will locate and identify messages that are sent from genuine companies and highlight them with a green shield. 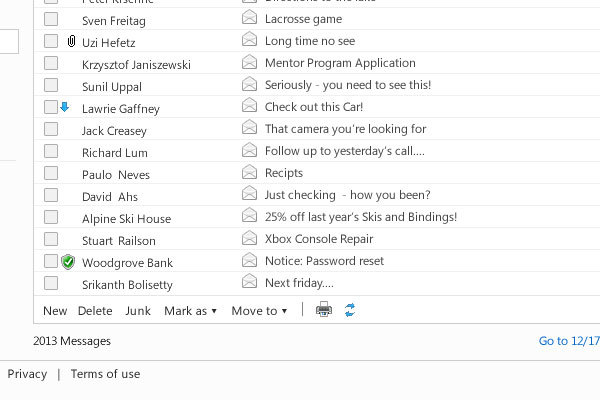 Microsoft is clearly onto a winner with the new Hotmail. The new features and security efforts will not go un-noticed and those who are struggling with POP3 access on their iPhone or Android devices will welcome the new push mail option. Microsoft has a strong focus on security with the new Hotmail. The new security features will make webmail safer for every Hotmail user and will likely cut down on the number of accounts that are hijacked each month. The strong focus on de-cluttering the inbox will please many who struggle with their email in a daily basis. Microsoft won't provide an exact date when the new features will be available, simply stating "Summer 2010". Expect to see them some time during June.