Windows 8 is currently expected to launch sometime in the mid-to-late 2012 time period. By that time the capacity for mechanical hard disk drives for PC desktops could be much higher than they are now, even with the current hard drive shortage. In the newest (and sometimes highly technical) entry in the official Windows 8 blog site, Microsoft's Bryan Matthew, one of the program managers on the Storage and File System team, writes about how Windows 8 will handle what the company calls "very large capacity” disk drives.

In Microsoft's world, hard drives that can be called “very large capacity” have the storage space of 2.2 TB or higher. The blog quotes a recent report from the IDC research team saying that the storage capacity for a single hard drive could go up to as much as 8 TB by the year 2015.

Microsoft's two goals with Windows 8 is to allow large hard disk drives to have all of its entire available capacity to be addressable as well as to give drive makers a way to have "more efficiently managed physical disks". That means sector sizes of 4K.

In terms of getting Windows 8 to allow all of a disk drive's capacity to be addressable, Microsoft has programmed the OS to use a variety of methods to make this happen. One is using the Logical Block Addressing (LBA) method. In Matthew's words, "... each sector has a predefined size (until recently, 512 bytes per sector), and sectors are addressed in monotonically increasing order, beginning with sector 0 and going on to sector n where: n = (total capacity in bytes)/ (sector size in bytes) ."

Another method for making large disk drives work in Windows 8 is a scalable partitioning scheme called the GUID Partition Table, or GPT, that was created by a group of companies back in the 1990s. 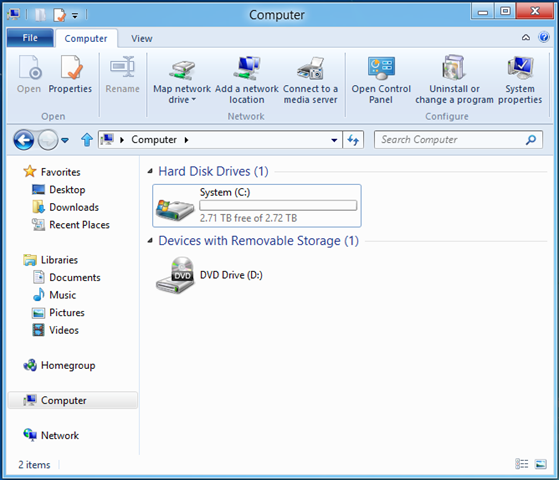 Matthew writes, "Our partners are working hard to deliver Windows 8 based systems that use UEFI to help enable these innovative Windows 8 features and scenarios (e.g. Secure Boot, Encrypted Drive, and Fast Start-up). You can expect that when Windows 8 is released, new systems will support installing Windows 8 to, and booting from, a 3TB or bigger disk."

The other issue for hard drives with large storage capacities has to do with large sector sizes, or 4K. As Matthew writes, "All hard disk drives include some form of built-in error correction information and logic – this enables hard disk drive vendors to automatically deal with the Signal-to-Noise Ratio (SNR) when reading from the disk platters. As disk capacity increases, bits on the disk get packed closer and closer together; and as they do, the SNR of reading from the disk decreases."

Hard drives are suffering from decreasing Signal-to-Noise Ratio and as a result the sectors on a hard drive have to store more Error Correction Codes, or ECC, that helps to correct errors while the hard drive reads a sector. Matthew writes, "Modern disks are now at the point where the current method of storing ECCs is no longer an efficient use of space, – that is, a lot of the space in the current 512-byte sector is being used to store ECC information instead of being available for you to store your data. This, among other things, has led to the introduction of larger sector sizes."

Now larger sectors of 4K in sizes are being used in new disk drives. In fact the first such drive was released back in late 2009. There are two methods of handling 4K sectors in such drives, which are called Advanced Format, or AF, drives. There are two ways that a hard drive access these large sectors. One is an emulation method. As Matthew writes, " ... it needs to read the entire 4KB physical sector into a cache, modify the 512-byte logical sector in the cache, and then write the entire 4KB physical sector back to the media (replacing the old block). This is called Read-Modify-Write."

As he writes, Microsoft will "introduce new and enhance existing API to better enable applications to query for the physical sector size of a disk". The company is also "enhancing large-sector awareness within the NTFS file system, including ensuring appropriate sector padding when performing extending writes (writing to the end of the file)."  Microsoft will also work on "incorporating large-sector awareness in the new VHDx file format used by Hyper-V to fully support both types of AF disks" as well as "enhancing the Windows boot code to work correctly when booting from 4K native disks."