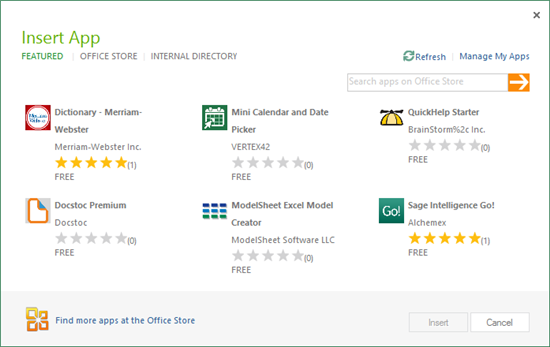 Office 2013 has been available to download in a preview version for a few weeks now, but today, Microsoft has launched a new feature to the software productivity suite that is very similar to the Windows Store feature that's been put into Windows 8.

It's the new Office Store, which allows third party app developers to make, sell and distribute apps made specifically for Office 2013 applications directly from the software. In a new blog post, Microsoft goes over the features of the Office Store.

As with the Windows Store, the Office Store has a similar UI that allows consumers to read about the third party apps, along with user submitted reviews, before they decide to download them. Microsoft states:

Since these apps are all based on web-standards, they load straight away – there’s no need for IT to pre-load them. If you use a new machine, just sign-in with your Microsoft account and all your apps will be there. Best of all, when you send a document that was created using an app (like an infographic in an Excel spreadsheet), a reference to it travels with the document so the recipient can start using that app too.

Users can also check out Office Store apps at Microsoft's official Office Store website. Microsoft has also set up a way for business and enterprise users to distribute in-house Office 2013 apps as well as to control which apps can be downloaded by their employees.

The Office Store also works much like the Windows Store for app developers in terms of uploading apps to the Store, adding in features such as free trial versions, and getting paid for those apps. Microsoft will take 20 percent of all revenues from app sold on the Office Store. At the moment, it appears that all Office Store apps are free for the preview version of Office 2013.