Microsoft's release of the Office apps for Apple's iPad has been a big success so far, with over 27 million downloads and counting since they were released in late March. Today, the company offered up some insight into how the Office for iPad team designed the apps. 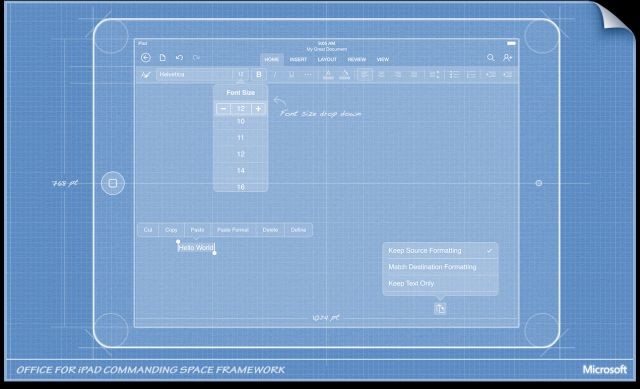 In a post on the Office blog, Microsoft said that instead of porting Office to the iPad, the team's design vision was to start from scratch. That included determining which Office commands would work with the touchscreen tablet and which would have to be left behind. The blog stated:

For example, creating unweighted cross-tabulations with PivotTables on your way to work or adding cross-references to masterpieces like War and Peace on the commute home is not how most users use their iPads.

The team wanted to adapt the familiar ribbon user interface that's available in the current desktop versions of Office applications to the touchscreen iOS environment. One decision was to place the ribbon inside the iOS navigation bar with only a single set of commands so that users would not be hit with a ton of different commands and features at once. There's a lot more detail in the blog post and is a must read for people who are really interested in how design and UI decisions for software are made.