Microsoft Office 2010 for Windows has already RTM (Release to Manufacturer) and is available on TechNet and MSDN, available in retail in June, but Office for Mac 2011 will be in stores this holiday season, according to the Office team's tweet. 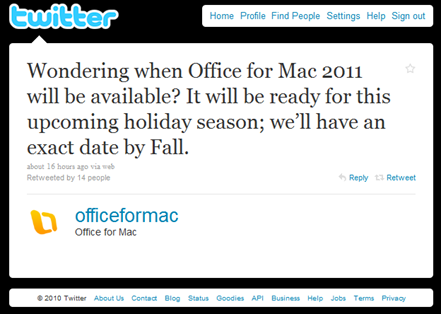 Office for Mac won't come with all the components that come with what Office Professional Plus for Windows has to offer, but will support Word, Excel, PowerPoint and Outlook.

This will be the first time Outlook will be available on the Mac, offering similar functionality and appearance, including a Mac inspired theme ribbon, offering users the same experience as Outlook 2010 for Windows.

Office for Mac 2011 will also allow for multiple document editing, so users can edit the same document at the same time, without getting a lockout notice.  Office for Mac will include document sharing with other Mac and Windows office users, through SharePoint, SkyDrive and web apps.