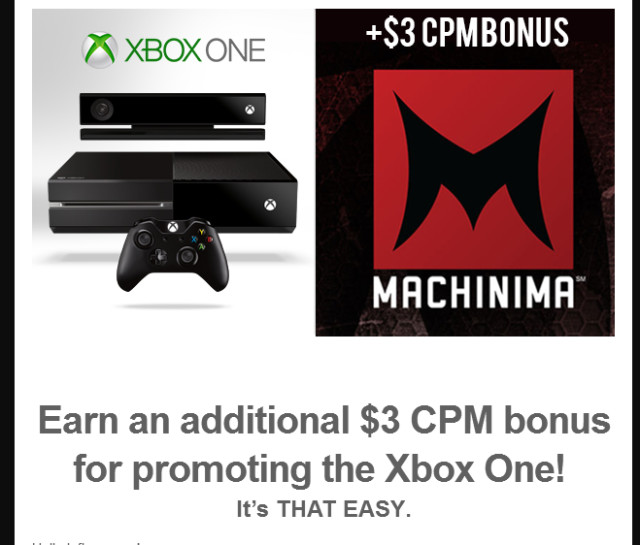 Oft-noted for their 'innovative' marketing tactics, Microsoft has recently decided to broaden their horizons and enter into a new field: stealth marketing. According to recent reports, the company is offering YouTubers extra money to mention the Xbox One in their videos, and even more for including Xbox One gameplay footage.

According to a leaked copy of the legal agreement between Machinima and its partners, who generally produce gaming content for YouTube, the company offered an additional $3 per thousand video views to anyone who included at least 30 seconds of Xbox One gameplay footage, verbally mentioned that they were playing the Xbox One, and tagged their video with "XB1M13". For content producers, that's a pretty sweet deal - but there's no doubt about the validity of the backlash it has garnered thus far, especially considering the general reaction to product placement in pop culture.

The legal agreement also included a few more conditions: video creators must not "say anything negative or disparaging about the Xbox One or any of its games", and they must also keep the deal a secret, which means that they can't mention anything about it to their subscribers lest they not get paid.

While this type of promotion may mark the beginning of a sort of 'dark age' of marketing, as it becomes more and more difficult to distinguish between paid advertising and genuine content, Microsoft doesn't seem to be relying on it as a primary aspect of its Xbox One promotion.

Despite this questionable element of the Xbox One's marketing, the company's promotional activities seem to be doing the trick so far nonetheless. The console has already reached many sales milestones, including the announcement of over 3 million consoles sold, and recent news that the Xbox One led in sales in the US during the month of December over its PS4 rival, selling 908,000 units.