Xbox One owners in the UK were disappointed to hear late last year that the BBC iPlayer app would not be ready for the console's launch, with no indication given as to when it might finally arrive. While an iPlayer app has been available for the Xbox 360 for almost two years, British owners of the next-generation console have been left without their fix of Beeb goodness. 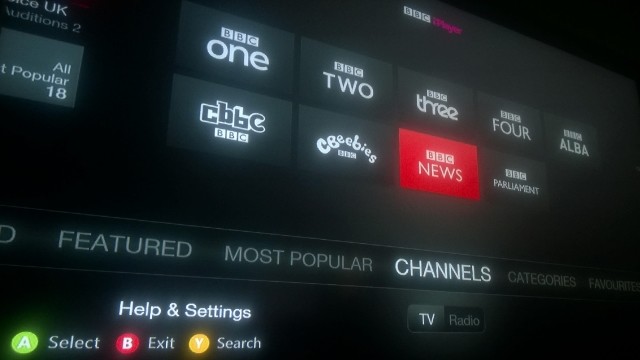 While there is still no official word on when the app will finally launch for the Xbox One, a report on Ultimate Gaming Paradise does at least claim to shed some light on the nature of the delay.

The site claims to have been contacted by an insider – described as “a programmer on the BBC’s development team” – who told them of a “serious flaw” in the app, specifically with regards to its Kinect integration. According to the report, “testing indicated that slight movements, from picking up a cup of coffee to scratching your nose, interrupted entertainment playback”.

The unnamed individual reportedly refused to divulge any further technical details regarding the issue, but claimed that chunks of the app have had to be rewritten in an effort to resolve it. The same person also alleges that Microsoft hasn’t exactly bent over backwards in providing assistance to sort out the problems, especially in comparison with the support that Sony provided to the BBC. In the source’s words, when developing the iPlayer apps, “Sony would send the [PS4] team any and all assistance. However, Microsoft was slow in each and every request for data or help.”

According to the insider, the Xbox One app will not launch “until the second quarter of 2014 at the earliest”. Given that the BBC first signalled the absence of the app from the console's launch line-up in November, that would certainly represent a significant wait – although it wouldn’t be the first time the Beeb has kept Xbox owners waiting.

In January 2013, the BBC told Neowin that it planned to introduce ‘Live Restart’ into its Xbox 360 app – a feature that allows users to restart or rewind live streams of its TV channels by up to two hours. A spokesperson said that the Corporation was aiming to launch that feature for the 360 “in the future”, but a year later, neither live TV streams nor the Live Restart feature have yet made it to the app.