For a while, we have been reporting on Microsoft's claims about the market share rise of Internet Explorer 9 among Windows 7 users. On the first of each month, Microsoft posts up a new entry on their official Internet Explorer blog, such as they did on March 1st, with their spin on how IE 9 is doing among Windows 7 users compared to Google's Chrome and Mozilla's Firefox browsers.

Microsoft based its results via data drawn from Net Applications. However, there is another company, StatCounter, that offers up its own web browser market share data results. In a new entry on the IE blog, Microsoft's Roger Capriotti gives the company's reasons why it prefers Net Applications' data gathering techniques over StatCounter.

One reason is that StatCounter gathers data from Chrome even when the web browser is “prerendering” some web pages. Users of Chrome sometimes don't actually visit the pages that Chrome is prerendering. Microsoft points out that starting in February, Net Applications removed Chrome prerendered web sites from its main traffic statistics, with the company saying that "prerendering in February 2012 accounted for 4.3 (percent) of Chrome's daily unique visitors.”

By contrast, StatCounter ranks China as the 22nd biggest country for Internet users based on the number of page views StatCounter claims people in that country generate. However, StatCounter's numbers come from the site coverage they have from China when in fact the country has the largest Internet population in the world. 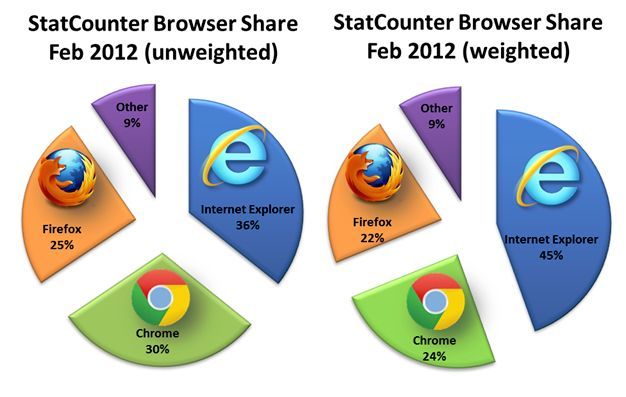 Finally, while StatCounter uses pure page views for its web browser stats, Net Applications uses unique visitors. Microsoft believes that simply using page views can be misleading when coming up with web browser market place data and can even lead to false results due to Internet bots that can generate lots of page views.