As Windows 7 gets ready for its next release, it could be already hurting Vista's remaining chances with businesses and organizations. Microsoft has started to push Vista to its corporate customers. Earlier this month Microsoft CEO Steve Ballmer warned companies to upgrade from XP. Following Ballmer, Gavriella Schuster, Senior Director in Windows Product Management group urges businesses to upgrade to Windows Vista now, even if they plan to move to Windows 7 when it ships.

Schuster argues that the benefits of Vista upgrade would outweigh the costs of upgrading to Vista and urges companies to start Windows 7 Beta testing as soon as possible.

Paul DeGroot, an analyst at Directions on Microsoft notes that Microsoft makes similar routine arguments during every major OS transition. However, he feels those reasons are not sufficient to get companies move to Vista. DeGroot remaines unconvinced and says even with Vista's improved deployment tools, an in-place upgrade is one of the most costly and difficult projects for an IT department and he hasn't heard of any software vendors, including Microsoft, making an announcement of halting the support to XP apps before Windows 7 arrives. DeGroot concludes most companies will wait till Windows 7 ships or move to Vista only as they get new PC's. 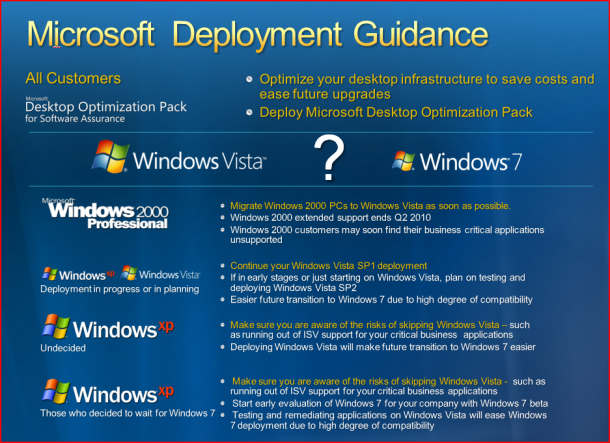 Nearly a 3rd of companies listened to Microsoft's call and are deploying Vista in North America and Europe. Another 27% plans to deploy Vista in 2009 or 2010. However, a survey by Gartner shows that about 30% of large businesses are likely to skip Vista and many haven't decided what to do. Only a few are set to deploy both Windows Vista and Windows 7 as soon as possible.

Microsoft has also launched a new blog, Windows for your Business to market Windows to its corporate customers in which Schuster talks about Microsoft's plans to help reduce the IT costs of commercial customers who are looking at deploying Vista.