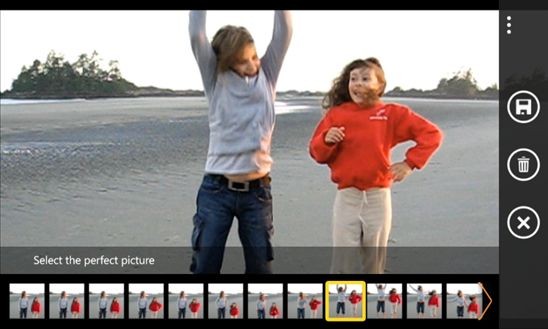 In September 2012, Microsoft showed off an interesting Lens app for Windows Phone 8 as part of the Nokia Lumia 920/820 press conference. The app, called Blink, was developed by Microsoft Research and was designed to let its users pick their favorite image from a burst of shots of the same location.

This weekend, Microsoft finally released the Blink app, and thankfully it's available for all Windows Phone 8 owners to download from the Windows Phone Store, so it's not just an exclusive for Nokia Lumia devices.

The video above gives a good idea of how the Blink app works. Basically, when you aim your smartphone photo lens at your intended subject and then open the Blink app, it starts taking images before or after you actually snap a picture, either by clicking on the shutter button or by tapping on the screen.

You then get a series of images that you can check out via a strip on the bottom of the screen. When you see the image that you think is the best one of that subject, you can select it and it becomes part of your official Camera Roll.