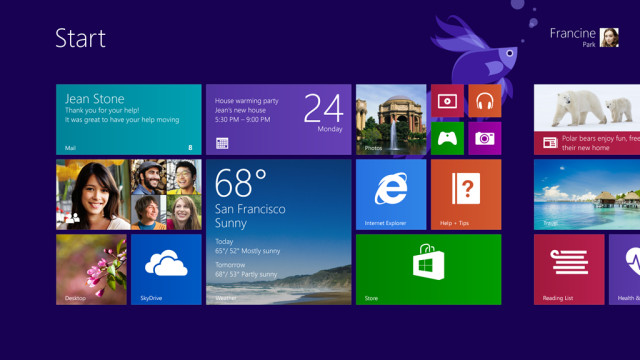 While Microsoft revealed some of what the consumer can expect from the upcoming Windows 8.1 upgrade last week, the company is using its TechEd conference in New Oreleans as a way to reveal what business and enterprise customers can also look forward to with Windows 8.1.

In separate posts on its Windows Business and Springboard Series blogs, Microsoft revealed that Windows 8.1 will add a way for PCs with NFC hardware to tap an NFC printer to begin the printing process. Microsoft states, "No more hunting on your network for the correct printer and no need to buy a special printer; just attach a NFC tag to your existing machines." Windows 8.1 will also connect to WiFi printers without the need to download special drivers.

Windows 8.1 PCs will be able to connect to Miracast-enabled wireless displays via Bluetooth or NFC. It will also allow PCs to become a WiFi hotspot for other devices and it will allow users to connect to a business's VPN with just one click if an app needs a connection to the company's inbox VPN.

In terms of security, Windows 8.1 will add new support for fingerprint access and Virtual Smart Cards and the included Windows Defender software will add support for monitoring network behavior. IT admins can control the layout of the Windows 8.1 Start screen on PCs that businesses provide their employees. If a person brings their own PC to work, Windows 8.1 can allow those devices to connect to company content and also have that content removed from the device if needed while still keeping the owner's personal files.

Windows 8.1 will add OMA-DM API agent support for businesses who want to use third party software like Mobile Iron or Air Watch to manage their company devices. It will also have a feature called Workplace Join. Microsoft states:

With Workplace Join, IT administrators now have the ability to offer finer-grained control to corporate resources. If a user registers their device, IT can grant some access while still enforcing some governance parameters on the device to ensure the security of corporate assets.