A study performed by IDC and commissioned by Microsoft has claimed that 33% of all software is counterfeit, revealing a number of other interesting statistics on the way to its conclusion. IDC surveyed 1,104 consumers, 973 business users and 268 CIO/IT managers across 10 countries to highlight how prevalent piracy and software counterfeiting is in the market today.

According to the study, the "direct costs to enterprises" related to dealing with counterfeit software and malware "will hit $114 billion this year", while "consumers worldwide will waste 1.5 billion hours this year" dealing with these problems. A large portion of pirated software apparently comes pre-installed on bought computers, with 78% of all pirated software coming with spyware. Also, 45% of the respondents claimed that pirated software caused their PC to slow down enough to warrant an uninstall. 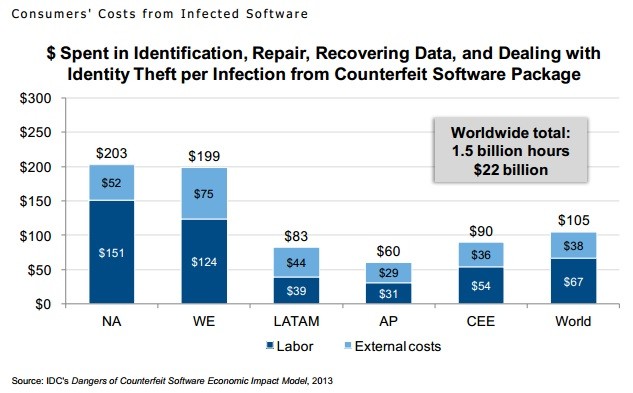 It was also interesting to see that 48% of the consumer respondents feared loss of data the most when installing "infectious pirated software", while 29% feared identity theft the most; just 2% were "not worried". Meanwhile, 46% of consumers on average worldwide said they did not install updates to software, while 10% of CIOs and IT managers disabled automatic program updates.

If you have the time and you're particularly interested, the entire 29-page report is available via the source link below.