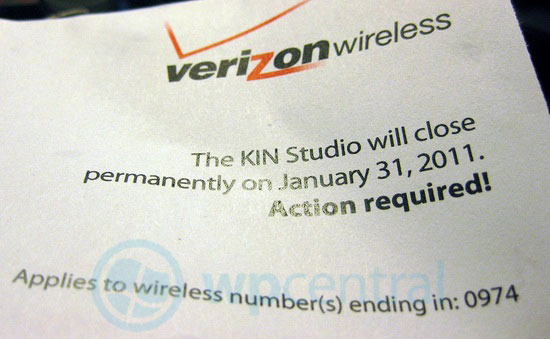 The KIN series of devices have been nothing short of a colossal blunder for Microsoft. After being pulled from store shelves after dismal sales, and then reemerging several months later, Verizon and Microsoft are now sending out a heads up to KIN owners that KIN Studio will close on January 31, 2011.

The closing of KIN Studio will essentially remove all the features that were originally touted when the devices were initially released. WPCentral got its hands on the memo from Verizon that states after January 31st, KIN studios will no longer be supported by Microsoft.

As a result, the following will happen:

After the removal of support, the KIN devices will be permantely gimped, losing a substantial amount of functionality that the devices currently enjoy. Because of this, Verizon is offering users a free 3G phone to replace their KIN. The devices that will be available is unclear, but users will at least not be forced to continue using a half working device