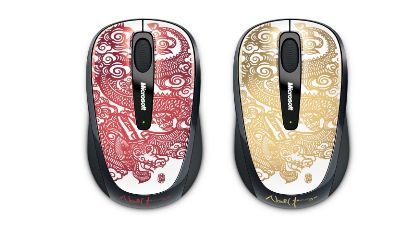 The Chinese New Year for 2012 doesn't officially start until January 23 but that isn't stopping Microsoft from announcing plans to release special edition versions of two of its PC mouse products to celebrate the occasion. 2012 will be the Year of the Dragon and naturally Microsoft has put some interesting dragon inspired designs for these special edition mice products.

As you can see above, the special version of the Microsoft Wireless Mobile Mouse features the same dragon illustration in both red and gold versions. Microsoft states:

The intricate dragon design was created by premier artist Nod Young, who mixes Chinese culture with technology to produce amazing results. In order to bring a modern twist to an ancient tradition, Nod used inspirations from the famous Nine-Dragon Wall of Beihai Park, a royal garden in China, and Dragon Ball – a popular cartoon. His goal was to shift the perception of the Dragon from solemn and dominant to a more intimate and relaxing symbol for people of all ages and traditions to enjoy.

The two versions of the Wireless Mobile Mouse 3500 Year of the Dragon are now on sale for $29.99 each.

The other Year of the Dragon limited edition mouse product is the Arc Touch Mouse which is black with yet another dragon design on top. Microsoft says the limited edition mouse, which will go on sale soon for $59.95, was created by " ... up-and-coming designer Lin Xu Pan who incorporated the five-finger claw dragon which is traditionally used for exclusive royal use – symbolizing nobleness. Each mouse also includes the signature of the featured artist on the mouse so you’ll have a real piece of artwork in the palm of your hand."