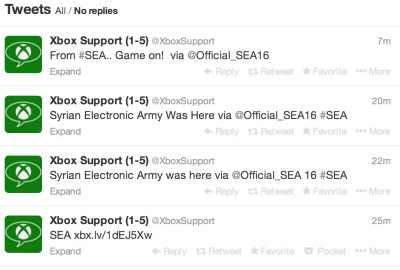 Microsoft's official Xbox support Twitter and the official Microsoft news Twitter accounts have been hacked today by the Syrian Electronic Army, marking the most recent in a long line of attacks against social media accounts by the organization.

The SEA, a collection of computer hackers in support of the Assad regime (amidst a bloody civil war), have recently engaged in a string of defacements against various social media pages and websites belonging to such organizations as VICE, the New York Times, and others. Their most recent target, however, seems to be Microsoft. And unlike others before it, this attack doesn't seem to have any political motivation - according to an interview of SEA member 'The Shadow' conducted by Techworm, the defacement of Microsoft's Xbox support Twitter was carried out 'To show the world that we still exist'. In addition to tweeting a few things out from the account, the SEA also tweeted out a message from their official Twitter confirming that they did in fact carry out the attack. Hours later, a second Microsoft Twitter account - @MSFTNews - was hacked, but the defacement was quickly removed.

Ten days ago the blog, Twitter, and Instagram of Skype - another division of Microsoft - were all hacked and defaced, with the SEA claiming responsibility and asking Skype to 'stop spying on people'. And only 11 days into 2014, the collective may only get more bold as the year goes on.