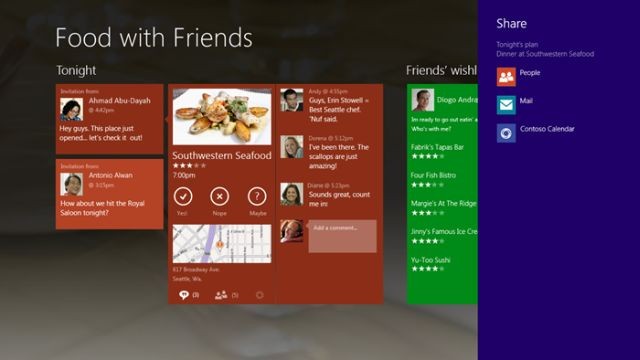 Mother always said it's best to share with others, and Microsoft apparently feels the same way with its Windows 8 Share charm.

In a recent post on the official Windows 8 app developer blog, Microsoft offers up an extensive look at how app makers can use the Share charm. There are a number of different data formats that can be accessed by the Share charm, including text, a URI, a Bitmap file or an HTML file. Microsoft says, "We recommend that you provide the shared content in as many data formats as you can to maximize the set of target apps that will recognize the content from your app."

Microsoft uses its demo Windows 8 app, Food with Friends, to give some examples of how the Share charm might work. For example, the app's landing page can let users access a calendar app to let other people know when and where dinner is scheduled to begin. It can also access a social networking app to, for example, send a Facebook news posts to their friends.

Microsoft believes putting in Share charm support is important for any Windows 8 app, saying, "By supporting sharing, your app is at a competitive advantage because sharing broadens the scope of end-to-end user scenarios possible from within the app itself."