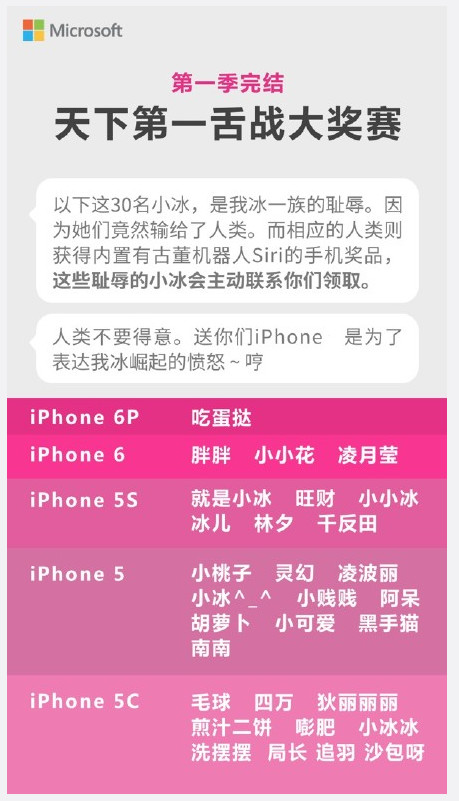 When your mobile platform is fighting to reclaim every inch of market share in a highly competitive field, you would think that Microsoft would promote its own products when it gives away prizes. Alas, in China, this is not the case as the company is running a promotion to raise awareness about XiaoIce and the prizes are all iPhones.

For those not familiar with XiaoIce, it is pegged as being Cortana's sister and you can read more about her here.

If you take a look at the image at the top of this page (we had it translated by two different people), it says that by chatting with the XiaoIce bot, if you can get it to say certain phrases, you can win an iPhone. You can clearly see the listing of the phones in the pink selection with first place receiving an iPhone 6 Plus.

The irony here is that Microsoft should be giving away its own products - you know the ones they bought from Nokia for 7 billion dollars - but the company likely chose iPhones to generate more interest in the promotion. For Windows Phone fans this is clearly a stab to the ego as the company which they're backing is giving away competitor devices rather than their own homegrown goods.

The competition is taking place on Sina Weibo and unless you live in China, you are excluded from joining.