The devastating effects of Hurricane Sandy on the eastern seaboard of the United States, which hit on October 29th, will likely continue to impact the residents of that region, especially in New Jersey and New York, for months and even years to come. Today, Microsoft has added a new app to its Bing Maps web page specifically so that its users can see the effects of the hurricane for themselves. 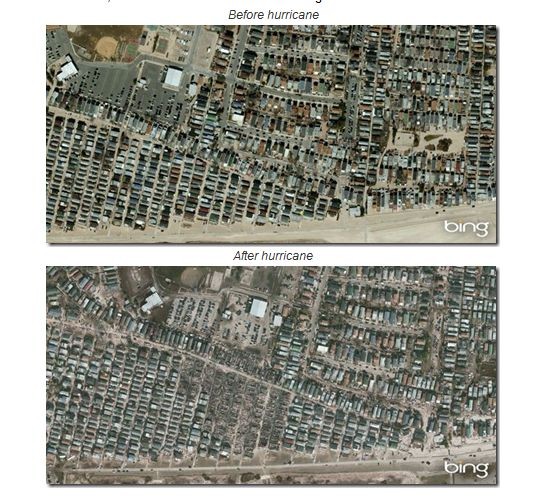 In a new post on the Bing Maps blog, Microsoft says that its users can access the app by going to the Bing Maps website, and then head to the Map app selection to pick the Hurricane Sandy option. Microsoft said, "Once weather permitted, Keystone Aerial Surveys, one of our Global Ortho flying partners, acquired over 5,368 sq km of striking high-resolution aerial imagery along the New York and New Jersey coastlines."

You can see how the shorelines of both states have been altered by clicking the "before" and "after" buttons in the Hurricane Sandy app. You can see an example of what's changed in the picture above of Breezy Point, New York. The blog states, "This small community suffered flooding, beach erosion, power outages and fire after the storm made landfall, as seen in the before and after images."

The blog post also has a link to Microsoft's Corporate Citizenship website, where the company has posted links to a number of relief agencies that people can donate to to help the victims of the hurricane.