Microsoft first announced Screen Sketch with Windows 10 Insider Preview build 17704 back in June. The app is meant to replace the Snipping Tool as the primary screen capturing option for Windows 10 users, offering all the currently available Snipping Tool functionalities, along with additional improvements.

In the app's latest update - now available for Windows Insiders - a couple of interesting changes have been introduced, including a rename to "Snip & Sketch", along with new screen capturing options. 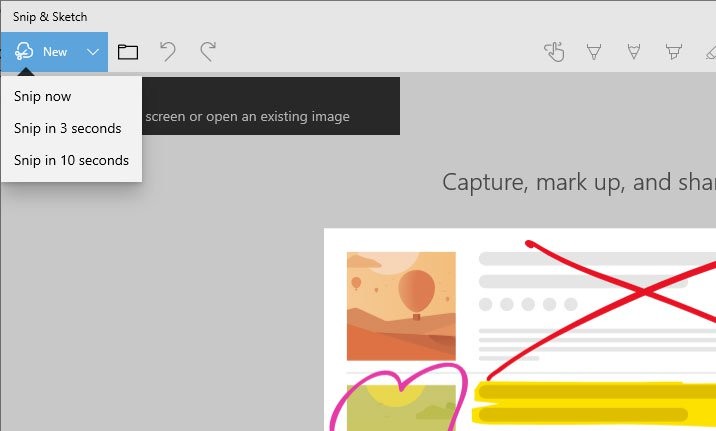 The app has been bumped up to version 10.1807.2286.0, and as can be observed, the title bar in the app now reads "Snip & Sketch", as opposed to "Screen Sketch". Similarly, the 'New' menu now shows a couple of new ways to capture your screen; you will either be able to take a snip instantaneously - as is the usual case - or delay it for three or 10 seconds. Interestingly, no countdown overlay accompanies the delayed snip feature, making it difficult to determine exactly when the snip will occur. It seems quite likely, however, that this will be refined in future versions.

Last month, Snip & Sketch was updated to remove the low-quality screenshots issue that had existed since the app's initial launch. Although Microsoft hasn't removed the Snipping Tool as of yet, it is interesting to see further improvements being brought to Snip & Sketch in order to make it a more viable replacement.

Keep in mind that these changes have currently only been introduced to Insiders in the Skip Ahead ring, so we might see a better polished version of the new screen capturing options by the time they are rolled out to general users. You can try out the new features by joining the Windows 10 Insider Program and then installing the app from the Microsoft Store.