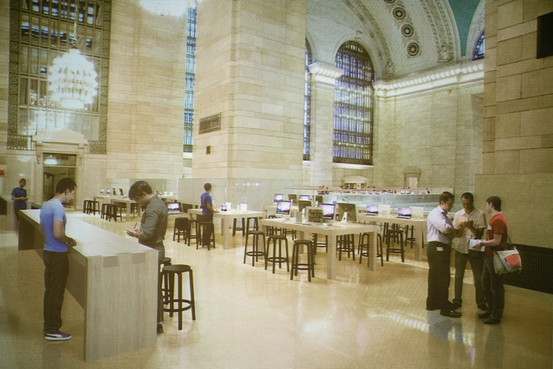 A few days ago it was revealed that Apple planned to open its largest Apple retail store yet in a location inside New York City's Grand Central Station. Now the Wall Street Journal has revealed more info on this massive new retail space for the iPhone, iPad and Mac company including some early artist renderings of what the final versions of the store will look like.

As you can see in the above rendering, the store will be designed to take advantage of the iconic art design of Grand Central Station with high ceilings, windows and lighting fixtures. It will also have displays for the various Apple products that will match the color and tone of the new location. Once Apple gets full approval from the city's Metro Transit Authority (which should happen sometime this week), the company plans to start building the massive 23,000 square foot retail store immediately. The new Apple store is scheduled to open in Grand Central Station in late November, just in time for the holiday shopping season.

The article states that Charlie Palmer’s Metrazur restaurant will be paid $5 million by Apple to leave its current location over eight years before its lease runs out. Apple is also expected to pay an annual lease that is expected to run $1.1 million, over four times what the restaurant was paying. All in all, it looks like Apple fans in Manhattan will have a new place to hang out in very soon.

Image via Rob Bennett for The Wall Street Journal