Microsoft announced the first major details of Office 2013 earlier this week, and of course, a version of the office software suite will be released for Windows 8. That means it will work with all of the various Windows 8-based notebooks and tablets that will be touch screen enabled.

In a new post on the Office Next blog, Microsoft gives a lot of information on how it has made Office 2013 work on touch screen-based hardware. Microsoft concentrated its efforts on five areas: touch responsiveness, touch targeting, selecting text and objects, typing, and commanding.

... we had to refactor much of the document surface to use a compositor where content is rendered into images and moved around on the screen with animations. This required us to migrate away from GDI to modern hardware accelerated graphics services. The result of this work is an experience that feels natural and responsive.

It increases the size of the QAT, Ribbon tabs, adds spacing around small buttons in the ribbon, increases the height of the status bar, turns on the Outlook touch triage action bar and adds space to expanded folders in Outlook.

Office 2013 also adds a new "series of selection patterns" for touch screen devices that will help with selecting text and objects while editing documents. As far as typing, we have already reported on how Windows 8 has a new touch screen keyboard. For Office 2013, Microsoft knows that many people don't care for a virtual keyboard when using applications like Office. The blog states:

For many years, applications remember paths to recently opened documents. This used to work well, as people primarily used one computer. With the use of Smart Phones, Tablets and the cloud, people need to access documents across different machines, at home and at work. If you are connected to the Office service, your document and common locations MRU will roam across all of your devices. This significantly reduces traffic to the file open and file save dialogs which invariably involves typing in hard to remember, archaic file paths. 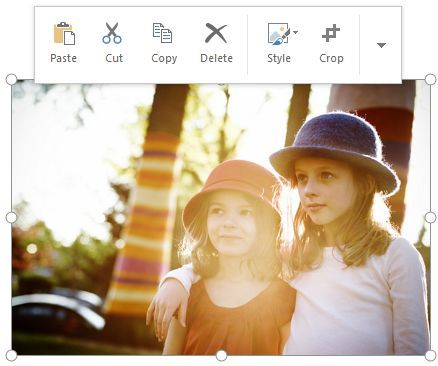 Finally, Microsoft has made accessing command menus easier with touch screen hardware. One move is improving the MiniBar, first launched in Office 2007. Microsoft states that the MiniBar menu appear when a Office 2013 user tap a piece of text, image or other item in a document. As you can see in the image above, the MiniBar has the Paste, Cut, Copy and Delete commands. There's also a secondary drop down menu for commands that are not as frequently used. 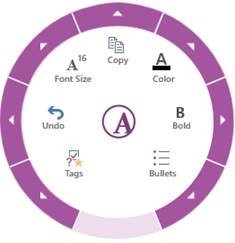 The blog also goes over the radial menu created for the OneNote application. Microsoft says:

The radial menu is designed so that the most common commands you need are available immediately.  Then if you need more commands, you can just swipe your finger out from the center of the menu or tap on any of the arrows around the menu.