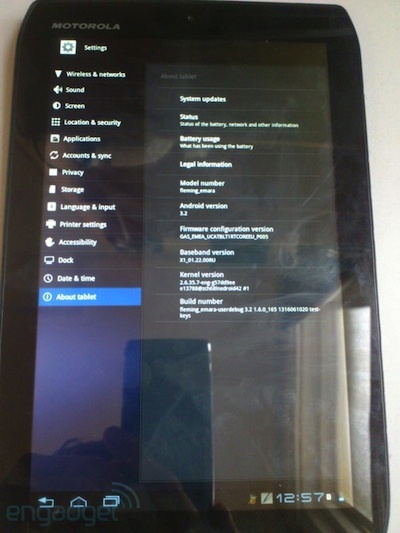 Earlier this weekend, the first pictures of what might be the next version of Motorola's Android-powered Xoom tablet found their way on the net. The pictures didn't reveal all that much but it certainly got the net buzzing about what the Xoom 2 might be like. Now two other web sites have posted up more pictures and info of the Xoom 2 and hint that Motorola might have two different versions of the tablet in the works.

Thisismynext.com reports that one version of the Xoom 2 will have a 10.1 inch screen, which is the same size as the first version. It's also supposed to be lighter and thinner than the first Xoom tablet and is supposed to have a dual-core 1.2 GHz processor inside along with 1 GB of RAM. That same story claims that it will ship with Abobe Flash Player 11 installed and will be able to stream Netflix movies and TV shows in HD (when available of course).

But that may not be all. Both Thisisnynext.com and Engadget are reporting that Motorola might also be working on a smaller version of the tablet called the Xoom 2 Media Edition. Thisisnynext.com claims it will have an 8.2 inch screen and weight just .95 pounds. There's no word on what hardware the Media Edition has running inside. There's also no word at all on pricing or a launch date for either versions of the Xoom tablet. Engadget has some pictures of the Verizon Media Edition which seems to be running Android 3.2.