Development of Windows Live Wave 4 is in full swing as Microsoft prepares the next versions of its consumer software and service offerings. With Windows Live Messenger apparently having reached milestone 3, screenshots have started appearing on the web showing its improved interface and new social features.

Following the first images back in December last year, more appeared in January and then just a couple of days ago the most recent screenshot surfaced. Now even more screenshots have been spotted by LiveSide, posted at cnBeta.com, which reveal additional features that should make their way into Windows Live Messenger version 15 - also know as version 2010. 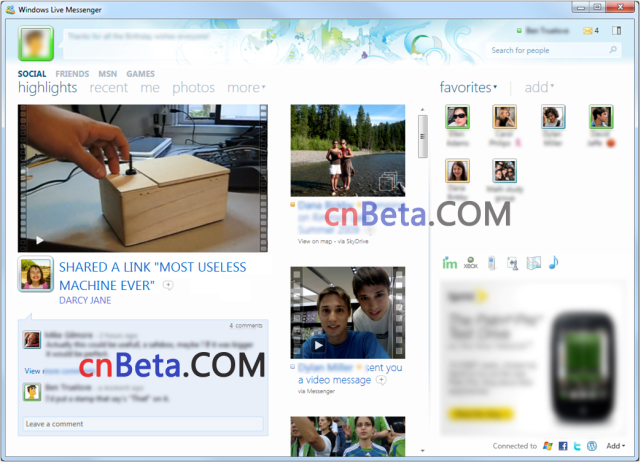 The first screenshot shows the "Social" view, similar to that seen in the other image leaked this week. Here we see that you can "connect" to Twitter and WordPress as well as Windows Live and Facebook as we saw previously. Whilst it was initially thought that connecting might be to different instant messaging network, this throws doubt on those suggestions as Twitter and WordPress do not feature IM services. It may instead by linking you other online accounts in a similar way to the current Web Activities.

As well as this we can see a new header theme (there will be multiple themes to choose from) and possible geo-tagging support (notice the "View on map" link underneath the top-right photo). Below that photo is a "video message" which could signal the invigoration of Windows Live Video Messages - a service which allows you to record messages through your webcam and send them to online or offline recipients, currently through a web-based interface. The videos in the screenshot appear to be embedded, which could mean playback within the Messenger window. 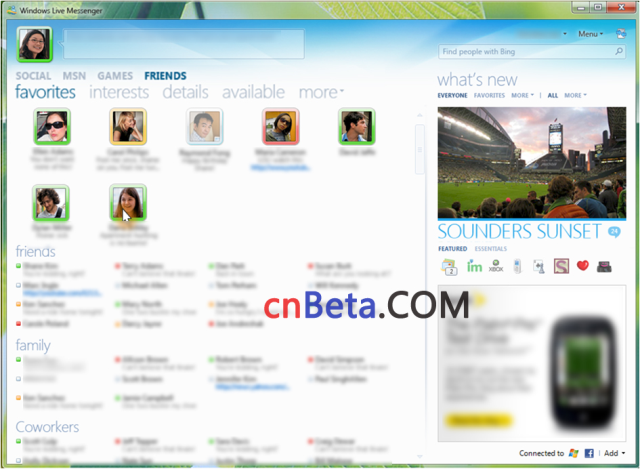 This screenshot shows the new "Friends" view from where you can see all your contacts and arrange and group them into different categories and views. Contacts are shown in a new layout and the what's new feed finds itself on the right side. One interesting think to point out might be the text "Find people with Bing" in the search bar, perhaps suggesting a greater integration between Bing and social networks such as Windows Live and Facebook in the future. Notice that this screenshot differs slightly from the first one in the position and design of some icons, confirming that all these screenshots will not necessarily represent the final interface.

For those of you that may just want to use Messenger to chat, an option exists to switch back to the classic and more compact contact list pane. Some of the new features, such as the "Connected to" options, are carried through to this view. The blurred out text towards the top of the window appears to be an email address and the appearance of an arrow beside it may signal that you can choose between other social network or website logins, or other Windows Live accounts. This could possibly be the much-requested polygamy feature finally making its way into Messenger, although don't get your hopes up just yet. 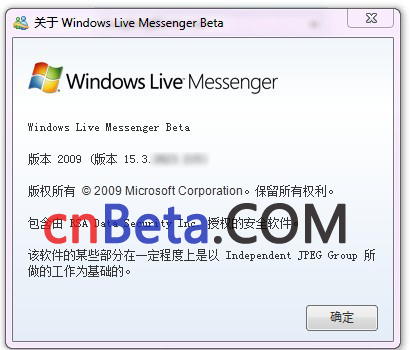 cnBeta.com also include a screenshot of the About screen to prove the build is genuine, and their articles seems to suggest that Windows Live Messenger 2010 will be designed for Windows 7, removing support for Windows XP but remaining available for Vista.

Another interesting screenshot has appeared on Wikikou which shows some more of the new emoticons. The new emoticons provide a simple revamp of the existing Messenger ones which have been in use for years.