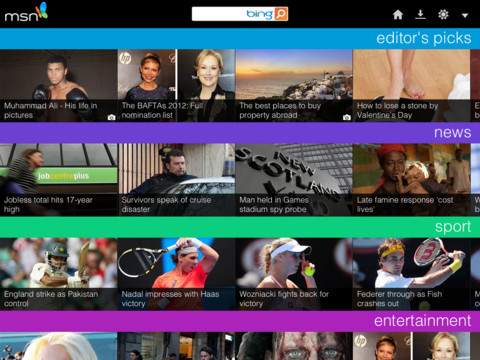 Microsoft continues to expand its app software line-up for Apple's iPad. Today, the company's MSN division in the UK released a MSN UK news application for the iPad. It's currently available to download for free via the App Store. The app allows its users to check out articles from the MSN UK service along with photo galleries, videos and more.

The app also has a version of Microsoft's Bing search program to allow users to search for articles and other content within the MSN UK app. It can also be viewed in both portrait and landscape mode and it also offers easy access to Microsoft's Hotmail and Windows Live Messenger services. There's no word yet if Microsoft plans to offer the MSN app in the US nor is there word if the app will be ported over to other iOS devices or for Android products.

Microsoft has slowly been expanding its product line-up for iOS products. In December it released the OneNote app for the iPad and also launched the Skydrive app for all iOS devices in the same month. Recently Microsoft confirmed it would release even more products for non-Microsoft platforms in 2012 with rumors that the company is trying to get Microsoft Office ported to the iPad.