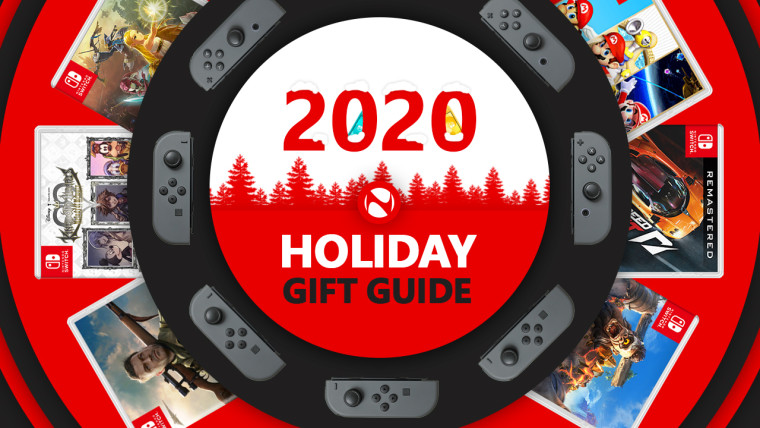 While 2020 may have felt like a whole decade for many of us, we're just now getting into the holiday season, and that means that it will soon be time to buy gifts. While celebrations are likely to be a bit different this year, you're probably still looking to get something nice for your loved ones or even yourself, and with the outside world being so dangerous these days, it may just be the best time to get some gaming on.

This is Neowin's 2020 holiday gift guide for fans of Nintendo games, and just like last year, it's mostly focused on the Nintendo Switch. By popular request from last year, we've also added UK links for all the products in addition to the United States.

Disclaimer: Prices for products on Amazon are for products bought in new condition directly from Amazon, which is our recommendation. Prices from third-party sellers may be presented when Amazon has no stock. Additionally, for games, prices are for the physical version when available.

2020 didn't bring us anything new in terms of new hardware for the Nintendo Switch family, but that doesn't necessarily make the system less appealing. We still have the options from last year, with the refreshed Nintendo Switch model offering much better battery life than the original version. Or, if you don't need to connect to a TV and want to save some money, you can get the Switch Lite, which is more comfortable and portable, more suited for the on-the-go gamer.

We did get a couple of special editions though, like the Animal Crossing: New Horizons themed version, which features pastel colored Joy-Con and dock, along with some art related to the game. In Europe only, there's the Fortnite edition, featuring yellow and blue Joy-Con as well as some traced images on the Joy-Con and console.

This year, Nintendo is once again selling a bundle including a Nintendo Switch and Mario Kart 8 Deluxe, but it's a better deal this time. This year's bundle has the new Switch model with improved battery life, and Nintendo is also throwing in a three-month subscription to Nintendo Switch Online, while keeping the $299 price tag.

The Nintendo Switch, especially the standard model, is a bit of a hot ticket item these days, so you might have to keep checking back on the links above, as most models tend to sell out quickly. The links above also let you switch between different colors easily, so you may be able to find a specific color while another may be unavailable. 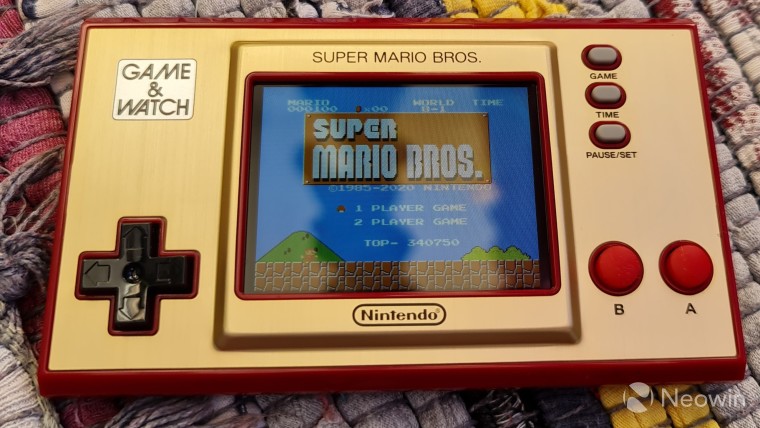 Nintendo did release new hardware this year, the Game & Watch: Super Mario Bros. This is a fantastic throwback to the company's first big successes in gaming, including the iconic Super Mario Bros. from the Nintendo Entertainment System. It also pays homage to the Game & Watch series of consoles that started back in 1980, and it all comes together in a beautiful package. It can be a fun way to experience these old-school games, but it's also a great collector's item, and Nintendo fans are sure to enjoy it.

Of course, the whole point of owning a gaming console is to have games for it, and there's no shortage of great games on the Switch. Below are what we believe to be must-have titles, though it's ultimately up to personal preference. We'll try to focus on new titles that released or got major updates this year, but some of them are also great buys even if they're not the most recent. For this year's Black Friday in the U.S., some of NIntendo's major titles will be discounted starting November 22. We'll be sure to keep the prices updated over time.

Animal Crossing: New Horizons (Amazon US: $49.99 ($10 off)| Amazon UK: £39) - The latest entry in the Animal Crossing franchise has become wildly popular in 2020, becoming the second-best selling game on the console in just a few months. It's a relaxing game where you can manage your own island by decorating it with items, which you can craft with resources you gather around the island. The game often gets updated with seasonal content, so it will probably stay fresh for a while.

Super Mario 3D All-Stars (Amazon US: $59.99 | Amazon UK: £39.99) - The Super Mario franchise turns 35 years old in 2020, and Nintendo celebrated the occasion by releasing the first 3D games in the series - Super Mario 64, Super Mario Sunshine, and Super Mario Galaxy - in a single package for the Nintendo Switch. These are three stellar games, and they've had their resolution increased to look that much better on modern TVs. Plus, the collection is only available until the end of March 2021, so now might be a good time to get it.

Clubhouse Games: 51 Worldwide Classics/51 Worldwide Games (Amazon US: $39.99 (ships December 20)| Amazon UK: £27.99) - If you're more into traditional board games than video games, Nintendo brought back the Clubhouse Games franchise this year, and it includes a ton of games to choose from. Most of these games are meant to be enjoyed with other people, which may be a great way to spend time with your family this holiday. Some games work with a single Switch, others may require multiple consoles, and some even work online so you can play with people far away.

Hyrule Warriors: Age of Calamity (Amazon US: $59.88 | Amazon UK: £49.99) - Three years of The Legend of Zelda: Breath of the Wild rocked the world, Nintendo and Koei Tecmo are telling the story of the calamity that took place 100 years prior to the events of that game. Combining the plot and characters of Breath of the Wild with the 1-versus-100 combat of the Warriors franchise should offer a refreshing way to experience the great battle against Calamity Ganon, and the perfect way to wait for the sequel to Breath of the Wild.

The Legend of Zelda: Breath of the Wild (Amazon US: $44.99 ($15 off) | Amazon UK: £47) - Of course, if you still haven't played the game that started it all, it's still as amazing of a game as it was three years ago. Breath of the Wild is the first open-world game in the Zelda franchise, and it's also the most expansive world we've seen in a Zelda game. It's incredibly easy to spend hours roaming around this world, and very hard to dislike this game. If you need even more, you can get the $19.99 Expansion Pass (£17.99 in the UK).

Super Smash Bros. Ultimate (Amazon US: $49.94 ($10.05 off)| Amazon UK: £47.00) - Even at two years old, Super Smash Bros. is one of those titles that you can still play for hours. Living up to its name, Super Smash Bros. Ultimate has the most amount of content ever in the franchise, featuring every character that's ever appeared in the franchise and more is still on the way. If you want to expand your game, the first Fighters Pass added five fighters for $23.49 (£22.49 in the UK), and a second Fighters Pass adds six new fighters, which are still being released in the next few months. It costs $29.88 in the U.S. and £26.99 in the UK, and it adds characters like Steve from Minecraft.

Mario Kart 8 Deluxe (Amazon US: $44.99 ($15 off) | Amazon UK: £39.99) - This is already one of the best-selling Nintendo Switch games, but there's a good reason for that. Mario Kart is another franchise that makes for a great game to play with friends, either online or locally. It's a bit more accessible than Super Smash Bros. Ultimate, so it's easy to enjoy even if you're playing with people who don't play games that often.

Bioshock: The Collection (Walmart (US): $29.83 | Amazon UK: £34.99) - Earlier this year, 2K Games had a big blowout of support for the Switch, and Bioshock: The Collection is a stellar addition to the library. Featuring the entirety of the Bioshock franchise, made up of three fantastic first-person shooter titles, the collection on the Switch is a great deal. However, even if you buy the physical version, the games require a significant download, so you will probably need to buy a microSD card as well.

Ring Fit Adventure (Amazon US: $79.99 | Amazon UK: £64.99) - It's not everyday that a videogame combines physical exercise with a single-player adventure and RPG elements, but Ring Fit Adventure does it wonderfully. This game will make you sweat a lot, and it'll motivate you to keep going, which is great if you want to stay active and don't have that much time to exercise outside your house.

Pokémon Sword and Shield (Amazon US: $39.99 ($20 off) | Amazon UK: £39.99 each) - Almost any Pokémon title is fairly easy to recommend for Nintendo fans, and Sword and Shield brought a lot new to the table, with the more expansive Wild Area allowing for free camera controls, the Dynamax and Gigantamax transformations, and more. If you'd like even more content, the Expansion Pass was released this year, adding the Isle of Armor and The Crown Tundra areas, new Pokémon, and new mechanics to make competitive battling more accessible. The Expansion Pass costs $29.88 in the U.S. and £26.99 in the UK, but it's only available digitally. Or you can get a new edition of the game including the Expansion Pass, which costs $88.59 in the U.S. or £64.99 in the UK.

If you already own all of these or if you're looking for something different, there are a ton of great games on the Switch. Here are some of the most popular titles:

One thing you're most likely going to need if you own a Switch is a Nintendo Switch Online subscription, which is required if you want to play games online. If you don't know what games your gift recipient likes or has, a Nintendo eShop gift card can be useful so they can buy whatever they want.

We hope these options help bring some joy to your 2020. Happy holidays!