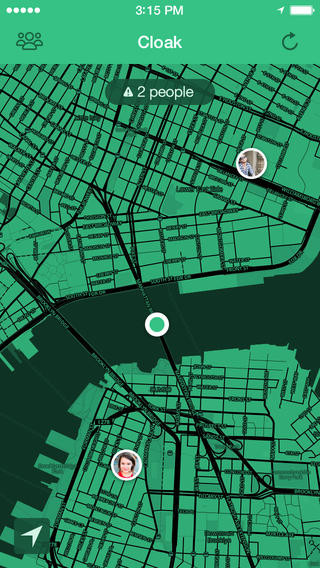 A new app has hit the iOS app store, with a unique anti-social selling point.

The app, called 'Cloak', scrapes social media sites such as Foursquare and Instagram so you can figure out where your friends are - and effectively avoid them. Cloak displays a map with the last known location of your friends (or enemies) so you can dodge any awkward run-ins; the app also has the option to send push notifications when someone you know is nearby.

According to its app store page, Cloak describes itself as "the antisocial network"; a welcome avoidance to social interaction in the hypersocial world. It even makes a nod to Google's famed private browsing setting, referring to itself as "Incognito Mode for real life".

Some have dismissed the app as a simple gimmick, but Cloak's creators maintain that it has a purpose. In an interview with the Washington Post, Cloak developer and former Buzzfeed creative director Chris Baker defended its use.

Personally, I think we've seen the crest of the big social network. Things like Twitter and Facebook are packed elevators where we're all crammed in together. I think anti-social stuff is on the rise. You'll be seeing more and more of these types of projects.

Cloak is currently free in the iOS app store, and while it isn't currently available for Android, its developers claim they will "expand the idea" if it proves to be a hit with users.